UFC firebrand Colby Covington has once again hit out at the ‘Black Lives Matter’ social justice movement, branding it a ‘joke’ and saying that those involved in it are ‘complete terrorists’.

Welterweight contender Covington was critical of the movement before and after his fifth-round injury TKO win against Tyron Woodley earlier this month in a fight which stoked racial tensions within the UFC.

Woodley, who is a prominent supporter of the movement, wore a T-shirt bearing the BLM slogan in pre-fight media engagements – but it is a movement in which the brash, MAGA-supporting Covington has little sympathy for.

Woodley, it should be noted, hails from Ferguson, Missouri – the scene of unrest following the 2014 shooting of African-American man Michael Brown by white police officer Darren Wilson.

“First off, I didn’t say anything that the BLM website doesn’t already advertise,” Covington told the Australian podcast ‘Submission Radio’.

Black Lives Matter has not been designated as a terrorist group by the US State Department.

The mission statement on the BLM website states that its goal is to “eradicate white supremacy and build local power to intervene in violence inflicted on Black communities by the state and vigilantes.”

In July, it was claimed in some US outlets that Black Lives Matter may be the largest movement in the history of the United States, with figures suggesting that between 15 and 26 million people participated in protests following Floyd’s death.

The original founders of BLM have expressed Marxist views but others have claimed that the sheer breadth of the movement has outgrown any such ideological beliefs held by its founders.

“They don’t want equality, they want anarchy,” Covington continued. “They’re burning and looting our American businesses, they’re killing people, they’re just putting innocent lives in danger. And for what? For what purpose? They don’t have an actual purpose.

“They’re being led by Democrats, they’re being led by Joe Biden, and they’re fighting for a cause that is non-existent. Where does the Black Lives Matter checks and donations go to? They go to funding a Democratic president,” Covington added without evidence.

Covington’s stance, as well as comments made about Kamaru Usman, drew the ire of several UFC sponsors – most notably the organization’s apparel partner Reebok who said in a statement that they do not underscore Covington’s views.

Dana White, for his part, gave Covington a pass for his comments and said that the UFC supports free speech and would not muzzle the controversial welterweight contender. 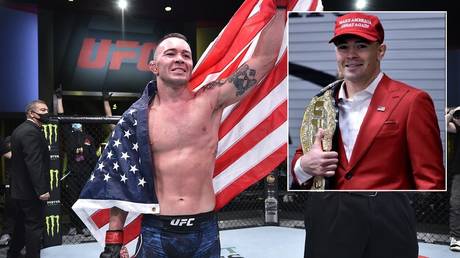