Angry fans of German side Heidenheim have been filmed raging and lobbing objects at the team bus of opponents Werder Bremen after narrowly losing a crucial relegation playoff, dashing their team’s dream of reaching the Bundesliga.

Heidenheim had an excellent season, finishing third in the second tier by a point to earn a shot at promotion to the Bundesliga in a two-legged playoff tie against Werder Bremen, the third-bottom team in the top flight.

After drawing the first leg 0-0 at Bremen, fans knew a win would ensure their season finale ended in glory – but their side never went ahead in a 2-2 draw that included a chaotic ending as both teams scored well into stoppage time.

Bremen’s two goals away from home meant they stayed up by the narrowest of margins in a behind-closed-doors decider that drew angry crowds to the streets as the visiting team bus set off away from the largely deserted Voith-Arena.

Glass could be heard smashing while fans shouted abuse, confronted security staff and threw beer at the Bremen players as they tried to board the coach.

The poster of the footage tagged local police in the social media post, telling them that he hoped it would help them to identify and punish the “idiots” in the clip.

“The local hooligan scene is at full throttle,” replied one viewer, while another joked: “Terrible scenes. Beer was spilled.”

Watching the furore on YouTube, a fan said: “Now they really deserve to stay down.” 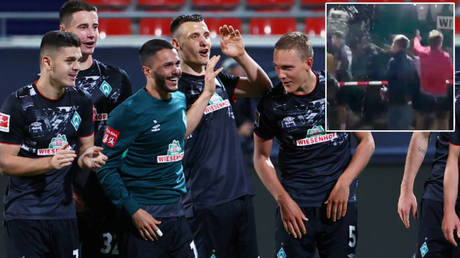 ‘Lucky not to get a red’: Ronaldo accused of lashing out in ‘total frustration’ during Man Utd hammering by Liverpool