Close
Trending News
HomeSport‘They could do so much’: Boxing icon Tyson turns social justice warrior as he urges Fury and Joshua to help destitute drug addicts

‘They could do so much’: Boxing icon Tyson turns social justice warrior as he urges Fury and Joshua to help destitute drug addicts

‘They could do so much’: Boxing icon Tyson turns social justice warrior as he urges Fury and Joshua to help destitute drug addicts

Mike Tyson has told champions Tyson Fury and Anthony Joshua that they should hold exhibition bouts and give the money to the “homeless” and “drug-infected”, offering to fight them in a year and calling Roy Jones Jr “the greatest”.

In a month when much has been made of the former heavyweight champion’s apparent willingness to fight the current elite, 54-year-old Tyson explained that he would face the likes of WBC king Fury and multiple title-holder Joshua as part of a money-spinning plan to help those suffering from homelessness and addiction.

Fury and Joshua are rumored to be set to pocket around $125 million each from the first of their potential superfights next year, and Tyson warned that spending his purses on expensive possessions had not made him happy during his notoriously checkered past.

“Buying a new car, girlfriend, mansion, plane, boat – that doesn’t do it for me anymore,” he told BT Sport ahead of his return against Russian-American Jones Jr on Saturday, which will rake in almost $50 per buy on US pay-per-view. “It didn’t work, trust me.

Mike Tyson says he would be open to fighting Fury, Joshua and Wilder in charity exhibitions 😯 #TysonJones pic.twitter.com/s0AsTAwdx7

Mike Tyson vs. Roy Jones Jr. is a week from today.

Check out Mike Tyson at 20 vs 54. pic.twitter.com/YZhMfun0dO

The debate around the responsibilities of high-profile sportspeople to speak out on social issues has hit the headlines again recently, with woke icon Megan Rapinoe telling Cristiano Ronaldo and Lionel Messi to do more on their vastly-followed platforms and top-level footballers under pressure to take pay cuts and make public displays of philanthropy.

“That wouldn’t even be a tenth of their charitable heart to do something like that,” Tyson argued about his proposed initiative.

“Matter of fact, fight exhibitions with me. Most of our charity will go people who really desperately need it. We can help people.

“They’ll be fights but I want you to label them as exhibitions so it won’t come across as hard feelings to everyone. I would like to fight both of them in a year.”

He would be stopped by everyone of them

Pundits and fans have been worried by the idea of tough-talking Tyson taking on top fighters in their prime, coming more than 15 years after he comfortably lost his final two professional fights to journeymen.

Commissioners have cautioned that Tyson, who has looked menacing in training clips, and Jones Jr, who won a title in 2018, will not be allowed to inflict serious damage upon each other or seek a knockout when they clash in California.

“I’m right on top of him, first round,” Tyson predicted when asked what would happen in the first round. “That’s all I have in my mind.

“My mind is a torture chamber. It constantly prepares me for war, every tenth of a second.

“I’m stepping in the ring with probably the greatest fighter that ever came on this planet. It’s not like I’m fighting Santa Claus or [cartoon character] Joe Palooka.”

51-year-old Jones Jr admitted that he did not know what to expect from the unpredictable “Iron Mike”.

“Why not?” he replied when asked why he had agreed to the fight. “It’s Mike Tyson. If you’ve got to think hard about this, there’s something wrong with you.

“My state of mind is that you’re fighting one of the most dangerous punchers ever to have graced the game, one of the most exciting people – who also, by the way, bit a guy’s ear off [against Evander Holyfield in 1997].

“When you get in the ring with him, you’d better be ready for anything and everything.” 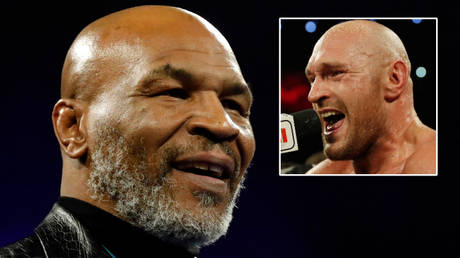