Ex-V8 driver Renee Gracie, who officially left the sport in 2019 and now has a career on adult subscription site Only Fans, has accused Supercars chiefs of having an “old-school mentality” and using her as a “sex sells figure”.

Gracie formed the first female pairing in the sport when she competed at the 1,000km Bathurst 1000 race alongside Simona de Silvestro in 2015, but was replaced by male driver Jordan Boys after a series of poor results.

The first Australian woman to race in Supercars full-time has said that bosses merely pretended to support women, insinuating that they showed double standards by turning their backs on her following her move into adult entertainment.

“It’s funny – it’s so contradicting because they sold me as a sex sells, good-looking driver,” the 25-year-old told the Daily Telegraph.

“Now I’m in an industry where I make money from my good looks, they want nothing to do with me.

“For years I raced in development series and Supercars wanted to promote that I was a woman racing. I was this ‘sex sells’ figure.

“They wanted to benefit from it. Now I’m in the industry I am, and I’ve made the change, they want nothing to do with it.

“They claim to promote women. They push it. They want a female so bad, but at the same time, they don’t really.”

Gracie, who has posed on a car while covering her breasts with her hand in the first edition of her new digital magazine, has spoken of the sharp contrast between her old and new professions.

While she struggled to gain funding for her Supercars exploits, she makes thousands of dollars a week for her racey shoots and expert content-making sessions for other models.

Her latest interview claimed that she now makes as much as $500,000 a month, and earlier this year she described the switch as putting her “in a financial position I could never have dreamt of”.

She was seen as a pioneer for her partnership with De Silvestro at Bathurst, the latest edition of which takes place this weekend, but described being a female in the sport as “hard” and “tough” at the time.

Fellow V8 driver David Reynolds became embroiled in a row and received a $25,000 fine for calling the pair “the pussy wagon” – a term that Gracie has redeployed to describe her own cars.

The driver who became the first woman to compete in the Porsche Carrera Cup has predicted that it would be some time before her lead was followed again.

“There are people in Supercars with old school mentalities,” she said. “It’s 2020 – some things have to change.

“It’s a tough industry for women and I don’t think we will see a female driver for a long time.” 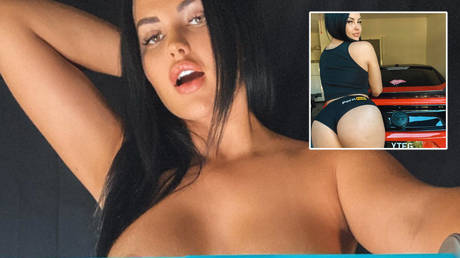