The NBA’s plan to restart the season with players locked down at Disney World in Orlando for three months will fail if stars are banned from having sex with their partners, according to a commentator who is predicting violations.

Basketball bosses are planning to move teams to the resort in Orlando and keep them there in a desperate bid to complete the season during the coronavirus pandemic, meaning that players could be required to go without sex as part of rules aimed at preventing the spread of Covid-19.

That idea will prove disastrous when sexually-frustrated athletes ignore quarantine to take part in “recreational activities” with their wives and girlfriends, according to a ranting pundit – and fans have joked that groupies could also be invited in by players.

“They will struggle with three weeks,” insisted TV commentator Stephen A Smith, setting off on an explosive rant during a debate about the risks to the resumption of the season that left his fellow analysts laughing nervously and holding their heads in shock.

“Do we really think the recreational activities that these guys are accustomed to are going to be compromised for three months? I mean, somebody’s got to say it.”

The season has been suspended since March 11 while the US has been ravaged by the coronavirus, but there are hopes that play could restart behind closed doors this summer despite 16 out of 302 players tested positive tests carried out last week.

Players are believed to be expected to remain isolated in camps for the first month after the anticipated return, at which point they may be able to meet their partners.

Presenter Max Kellerman asked: “What do you think they are going to do – smuggle in women in birthday cakes?”

Don’t confuse the issue. I said: players w/ their wives; single players with their girlfriends. You can’t tell players they can’t bring ANYONE — essentially go celibate for a month — and think there will be no violators. Ain’t happening. THAT IS WHAT I’M SAYING. Nothing more. https://t.co/oeyqUPxrjV

Oh, will you STHU! That’s an entirely different — and far more serious subject. You want to get that sensitive, turn the damn challenge and go watch the news. https://t.co/hxKc46hKJF

Smith said: “They’re going to violate the bubble. When it comes to your wife or, if you’re not married, your girl, it’s a struggle.”

He argued that players would have preferred a plan to move the season to the less sedate setting of Las Vegas and told one of his fans on Twitter, where he has a following of almost five million: “You can’t tell players they can’t bring anyone – essentially go celibate for a month – and think there will be no violators.”

One commenter told him: “This is a sexist statement. What about the men and women in the military that are separated from their spouses for even longer? These guys get paid millions, it’s only a few months.”

Smith replied: “Shut the hell up. That’s an entirely different and far more serious subject. You want to get that sensitive…go watch the news.” 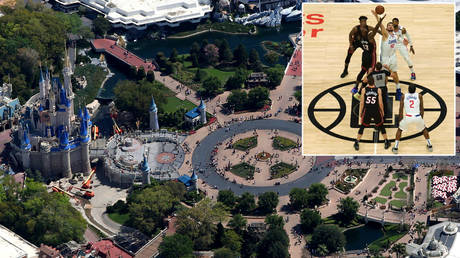