‘They asked which role I play in bed!’ Russian women’s world powerlift champ humiliated at being asked to prove gender on flight

‘They asked which role I play in bed!’ Russian women’s world powerlift champ humiliated at being asked to prove gender on flight

Russia’s women’s powerlifting and bench press world champion Anna Turaeva has told of her humiliation at being asked to prove she is a woman by airline employees while boarding an internal Russian flight recently.

Turaeva is a six-time world champion in powerlifting, as well as a ten-time European champion and has held the world, European and Eurasian records in her discipline. She is also a bench press champion and record holder.

The stocky, skin-headed Turaeva was flying from St. Petersburg in the very north west of Russia, to the southern town of Krasnodar through Moscow when she experienced an incident she described as “humiliating” while boarding her flight.

Addressing readers as “my dears”, Turaeva wrote: “Today I want to share with you a horror which happened to me yesterday. I have a strong character and nothing can faze me. But people are different and also react differently.

“I flew transit from St Petersburg to Moscow and then Moscow to Krasnodar. At the entrance they refused to let me through, citing the fact that in my passport, my gender is written as ‘female’.

“It was humiliating. In front of the entire queue, they gave me a lecture like a kid with questions of an intimate nature. They wanted to know which role I play in life and between the sheets.”

Turaeva shaves her head and regularly bares her chiselled chest to go topless in pictures on her Instagram account, even being snapped seemingly enjoying being the centre of attention for a group of bikini-clad girls on the beach.

Nevertheless, Turaeva called the confusion by the air company “anarchy” and described the process of proving she was in fact a woman like being a five-yer-old being “lectured with intimate questions”.

“Despite this, I didn’t allow myself the slightest offence and tried to resolve the problem. The entire queue watched this anarchy, and I felt absolutely helpless.

“And I, like a five-year-old child, tried to prove that I was a woman. I tried to explain why it was this way  and why they were not right. As if it was some kind of obligation. I did everything that was asked of me, so that they would finally believe my origin. And then a miracle happened. They let me on the flight!

Turaeva then went on to explain how things got worse when she tried to board her connecting flight at Moscow’s Vnukovo airport to make the last leg of her journey from the Russian capital to Krasnodar.

“But it all didn’t end there. Having landed in Moscow, I got into yet another awful situation, where they met me with aggression. It was genuinely frightening. I felt like a criminal or something even worse. Not an ounce of respect, or a sense of delicacy and I’m not even talking now about subordination.

“To the company I say: I worked hard all my youth and won world championships through blood and sweat for my country not for you to treat me this way!”

Turaeva has received support from fans online who have called the actions of the employees “homophobic”; others commented that although it is their job to ask difficult questions, the staff may have found another way of dealing with such a sensitive matter.

Others believed that given even Turaeva’s photos on Instagram are hard to judge which gender she may belong to, it is easy to understand their position. It was reported that the airline had already begun an investigation into the matter and had promised to find a resolution. 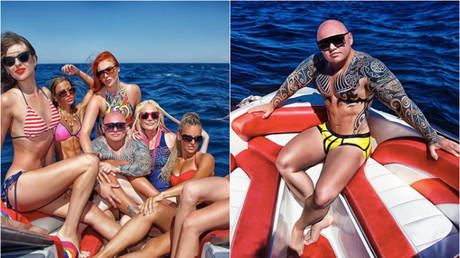 Germany can avoid another national...

'It's been extremely tou...