Team GB champ Bianca Williams has called for a leading police boss to quit and labeled the UK “very racist” after she was separated from her baby during a search on a car being driven by her athlete partner Ricardo dos Santos.

In footage released by Williams, Portuguese 400m record holder Dos Santos can be heard telling Metropolitan Police officers that he “didn’t do anything” as they approach the car to ask the couple to step out while a search for weapons takes place.

While Dos Santos can be heard shouting in the background, an increasingly frantic Williams sounds on the brink of tears as she asks: “Why are you touching my son? My son is in the car.”

The couple appeared together to speak of their ordeal after releasing the clip from the confrontation in London on Saturday, accusing the force of abusing its power in photos that show the car doors and boot being opened with a buggy left flat on the road.

“I haven’t been able to watch the video back because it breaks my heart hearing my voice and how upset I was,” the European and Commonwealth 2018 gold medalist told Sky News.

“I’m still upset and heartbroken by the fact that they removed me from my three-month-old baby, who has no idea what is going on.

“When are they ever going to openly say, ‘we stopped them because they were black’? They’re not going to say that because, to them, the UK is not racist – but the UK is very racist.

“It’s heartbreaking to know that if it’s not us, it’s going to be somebody else. It’s a weekly thing that a black man is stopped in a car because he looks suspicious or you smell cannabis. That’s outrageous. It’s disgusting.”

Williams said that force boss Cressida Dick “does need to think about her position, to be honest”, adding: “Time for change and for actions to have consequences.”

The latest UK government figures have shown that black people in England and Wales are almost 10 times as likely to be stopped and searched than white people, widening steadily from being four times as likely in 2015.

“You’re innocent until proven guilty,” said Dos Santos, who made the final at the 2018 European Championships and set the Portuguese national 400m record along the way.

“They see us as guilty. They acted as if we were FBI Top 10 – that was the way they came out of the car. It’s been numerous occasions, both of my cars.

“I get stopped for what reason? Because I look like someone they’re after, or I look like I do drugs or can’t afford a decent car?”

Sprinting great Linford Christie, who is a coach to the couple, personally challenged Dick to explain why her officers had been seen “assaulting the driver, taking a mother away from her child without one piece of PPE and then calling the sniffer dog unit to check the car over.”

“Was it the car that was suspicious or the black family in it that led to such a violent confrontation and, finally, an accusation of the car smelling of weed but refusing to do a roadside drug test?” he asked, adding the Black Lives Matter hashtag and another hashtag calling the Metropolitan Police racist.

“This is not the first time this has happened – second time in two months – and I’m sure it won’t be the last, but this type of abuse of power and institutionalized racism cannot be justified or normalized any longer.”

Dick has always maintained that the organization is not racist. In a statement, the force said the car was “driving suspiciously, including on the wrong side of the road” and had failed to stop before making off at speed.

(2)A vehicle with blacked out windows made off at speed from the officers, travelling the wrong side of the road. The officers eventually caught up with the vehicle which was stopped in LANHILL ROAD W9. The driver initially refused to get out of the vehicle.

“Each stop is dealt with on its own merits at the discretion of the individual officers involved, taking into account various aspects including behavior and compliance,” it said.

“Officers have to make these judgment calls regularly on a daily basis, often in difficult circumstances. Officers from the Directorate of Professional Standards have reviewed both footage from social media, and the body-worn video of the officers, and are satisfied that there is no concern around the officers’ conduct.”

Williams said the report had been “fabricated” and received an outpouring of support for sharing her experience, but other viewers were less sympathetic.

Well u where driving on wrong side of road dear and sped off when asked to stop..so how is this racism…Seriously take responsibility for your actions than trying the racism card.

The UK’s certainly too soft.

How do you think Jamaican police would have reacted to you NOT FOLLOWING SIMPLE INSTRUCTIONS!? Or Chinese police? Indian police?
(That doesn’t mean the police are always right) …but like others you’re taking the piss with the non-stop challenging

Every innocent citizen has the right to challenge the police. They are not immune to your basic rights, as much as they might tell you or make you believe otherwise.

“You were driving on the wrong side of the road and sped off when asked to stop, so how is this racism?” replied one.

“Seriously, take responsibility for your actions rather than trying the racism card.”

Another said: “The UK’s certainly too soft. How do you think Jamaican police would have reacted to you not following simple instructions? Or Chinese police? Indian police?

“That doesn’t mean the police are always right but, like others, you’re taking the p*ss with the non-stop challenging.”

A supporter of Williams hit back: “Every innocent citizen has the right to challenge the police. They are not immune to your basic rights, as much as they might tell you or make you believe otherwise.” 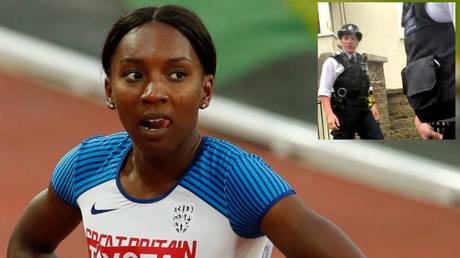