Belgian cyclist Tim Declercq was left battered and bruised after a torrential hailstorm descended on riders during the Criterium du Dauphine race in France.

The race is considered by many to be the acid test for riders as they prepare for the grueling action of the toughest road race in the world, the Tour de France, and that test got even tougher for the riders after terrible conditions beset Thursday’s stage.

The day’s action had been beset by bad weather from the start, as heavy rain fell throughout the early part of the proceedings. But things went from bad to worse for the riders when the rain turned into hail as the riders at the tail end of the field approached the finish.

The most notable victim of the painful deluge was Declercq, who shared a photo of his back after the race. The shot showed he was covered in nasty-looking red welts across almost the entirety of his back, as he exclaimed, “As if Le Dauphine was not painful enough for the legs!”

Tim Declercq and Maxime Chevalier after the stage, wow. 😳😬 That looks so painful, poor guys…Cycling is the new golf, just that you get hit by golf ball hailstones. #Dauphine pic.twitter.com/F4e1cybdx5

The videos of the hailstorm and photos of Declercq and fellow rider Maxime Chevalier prompted a host of responses on social media, with fans expressing their amazement at the conditions, and the toughness of the riders who endured them to finish the race.

One fan exclaimed, “Wow! These guys are tough!” while another praised, “Insane athletes,” with a strong emoji to show his respect. Another fan agreed, saying, “They are all heroes.”

Meanwhile, another made light of Declercq’s painful back, joking, “I don’t like the look of the polka dot jersey.”

The race continues today, as the riders look to complete the 157 kilometers between Corenc and Saint-Martin-De-Belleville.

For some of them, especially Declercq and Chevalier, it promises to be a painful few hours. 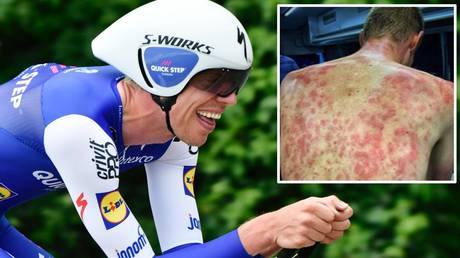 'My fighting IQ tells me Cono...