Close
Trending News
HomeSportThere’s no pleasing Megan Rapinoe! Even when she gets ‘social justice’, it’s a ‘disgrace’ it didn’t come quick enough

There’s no pleasing Megan Rapinoe! Even when she gets ‘social justice’, it’s a ‘disgrace’ it didn’t come quick enough

There’s no pleasing Megan Rapinoe! Even when she gets ‘social justice’, it’s a ‘disgrace’ it didn’t come quick enough

Virtue-signaller supreme Megan Rapinoe has taken her latest socially-woke swing at men’s football for… investing in women’s football, calling it a “disgrace” it didn’t come sooner, while being unaware that it actually had.

You have to hand it to US Women’s National Team captain Megan Rapinoe. Holding the world to ransom for everything you stamp your feet on the ground for in the name of ‘progressiveness’, and then complaining when it doesn’t come quick enough, is a clever and crafty hustle that has worked perfectly thus far.

And now, Rapinoe has received exactly what meets her never-ending demands with the creation and investment in professional women’s teams by major European clubs, but the self-appointed saint of soccer social justice still moans it should have come sooner, despite not being aware it already had.

While riding the woke wave that has washed over sports in recent years, Rapinoe has managed to wring out every last tenuous stand that could be made for social justice on the sporting stage, even when it logically does not add up, something which has become a staple of the two-time World Cup winner’s off-field persona.

The latest target of Rapinoe’s perennial progressive protest is English Premier League club Manchester United. Their crime against the Rapinoe crusade? Creating, carefully constructing and heavily investing in a successful and sustainable professional women’s football team that were crowned FA Women’s Championship champions in their very first year of existence.

You’d be forgiven for thinking that supporting and funding the furtherment of the women’s game by one of the biggest and most valuable football clubs on the face of the globe and returning remarkable success in a short timespace would appease Rapinoe, and place a large tick against one of her myriad gripes.

But then if Rapinoe acknowledges any improvement she would perhaps have to part with her favorite pastime of admonishing each and every move made by big guns in men’s football that does not align with her ever-altering agenda.

Thus, she nevertheless labeled it a “disgrace” that multi-billion dollar global behemoth brands didn’t rescue a millionaire athlete from the “hellscape” of playing elite-level sport for a living by investing sooner.

“I think women’s football in England is the same as in America – it is so far behind because of what we’ve had to overcome in the lack of investment,” Rapinoe bleated in a recent interview with the BBC.

“It’s 2020. How long has the Premier League been around? And we’re only just seeing a club like Manchester United put effort and pounds towards a women’s team? Frankly, it’s disgraceful. I’ve had a few team-mates go abroad and play, while I’m training and trying to keep fit in the hopes that eventually we’ll be out of this hellscape.”

If Rapinoe would have done her homework before ranting, she would know that Manchester United were in fact early pioneers of women’s football teams in the 1970s, when an unofficial Manchester United Supporters Club Ladies became the club’s de facto, although not professional, women’s team and were founding members of a regional North West Women’s Regional Football League in 1989, which preceded the surge in renewed interest in the women’s game in the 1990s.

The team from thereon played at varying levels of the FA Women’s National League to varying degrees of success, until they were taken under the wing of the men’s team in 2001, and were only disbanded when the hugely unpopular Glazer family takeover of the club in 2005 deemed the under-performing women’s team unprofitable, before a new team was set up in 2018 after a 13-year absence.

Other major Premier League teams such as Manchester City, Tottenham Hotspur and Arsenal, field teams in the FA Women’s Super League – the top tier of the women’s game in England – some stretching back to the late 1980s, completely nullifying Rapinoe’s nonsensical and factually incorrect notion that teams have dragged their heels in promoting the sport since the Premier League’s formation in 1992.

For someone who purports to be a campaigner for cultural equality, Rapinoe’s sheer ignorance for the history of the women’s game in England, and convenient preference to attack a famous name she plucked from thin air without bothering to educate herself on such trifling details as facts to hammer home her narrative is not only the real ‘disgrace’, but incredibly dishonest and irresponsible too.

Rapinoe’s platform influences millions of young girls who, for better or worse, look to the pink-haired player as a guiding light in sport and further afield, and to take a thoroughly misinformed swipe at an institution that encourages and nurtures women’s football, would negatively resonate with a generation of young women rather than champion the strides already being made on the pitch and behind the scenes to combat inequality, something Rapinoe seemingly only reserves for herself and her US teammates.

Making absolutely no apologies for posting these two again! 😍

Two of those teammates, Tobin Heath and Christen Press, also World Cup winners with USWNT, were acquired by Manchester United Women in what was considered a coup in the most recent transfer window. What’s more, shirt sales for the pair in the three days since they signed for the club in September outsold any of the men’s players including superstar Paul Pogba and captain Harry Maguire.

But instead of praising the social and economic success of two of her compatriots, Rapinoe has instead chosen to shine her hefty part of the limelight on getting exactly what she wanted, but the golden-plated platter on which her every desire was delivered not arriving fast enough, like a petulant, spoiled teenager who doesn’t like the color of their new Christmas-present cleats and has decided to let everyone know how hard done by they are.

World football governing body FIFA has further pledged $1billion (£755million) to women’s football for 2019 to 2022, and announced that figure will not face a cut precipitated by the current coronavirus crisis, which makes it hard to fathom how Rapinoe could be so disgusted by a perceived lack of investment especially during a global pandemic and its devastating economic implications.

Why should we sit here and listen to Rapinoe repeating tired untruths when families are currently suffering being locked down, docked pay and isolated, certainly not getting what they want, let alone within a timeframe agreeable to their every whim.

If Rapinoe decided to wake up instead of remaining woke, she might just be thankful for being one of the privileged few to have everything their hearts desire, rather than bitter about the hardships their minds create.

But then again, if Rapinoe got the change she is forever harking on about attaining, there would be no need for a self-righteous mouthpiece to rally the liberal brigade on their never-ending battles for social justice, so maybe it pays to be perpetually offended. 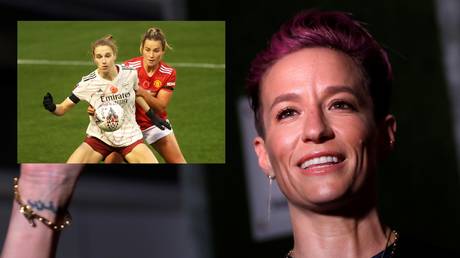