Close
Trending News
HomeSport‘There were moments when I wanted to give up’: Skating star Evgenia Medvedva says she will release autobiography after retirement

‘There were moments when I wanted to give up’: Skating star Evgenia Medvedva says she will release autobiography after retirement

‘There were moments when I wanted to give up’: Skating star Evgenia Medvedva says she will release autobiography after retirement

Russian figure skating champion Evgenia Medvedeva says she wants to publish an autobiography after her retirement, recalling all the ups and downs of her illustrious sporting career.

The two-time world champion who was undefeated for almost two seasons revealed that she paid a high price for her success, revealing that she endured many difficult times and sometimes wanted to quit skating altogether.

“If I could turn back time I would remind myself of the story of that [Solomon’s] ring which says that ‘this too shall pass’,” Medvedeva said.

“I went through hard times, when I wanted to quit, but I continued moving forward. I have a family and friends who didn’t allow me to give up and helped me to overcome difficulties.

“I wish I could return to those times and tell myself that everything will be ok, the difficulties will disappear and the sun will shine again.

“I want to write my autobiography. I don’t know exactly when, I’m working on it. After retirement I want to write down what was happening on and off the ice during my career.”

Medvedeva, who was Russia’s uncontested leader before the 2018 Winter Games, suddenly lost the battle for the Olympic crown to her younger compatriot Alina Zagitova.

After winning an Olympic silver, Medvedeva parted ways with her long-time coach Eteri Tutberidze and moved to Canada to train under renowned specialist Brian Orser.

With the emergence of the so-called quad-generation Medvedeva’s chances to regain her previously-held leading position has diminished with a world bronze medal being her best result so far after leaving Russia.

Despite facing rigorous competition inside Russia Medvedeva hasn’t given up and continues fighting for a spot on the national team, pursuing her dream to become an Olympic champion. 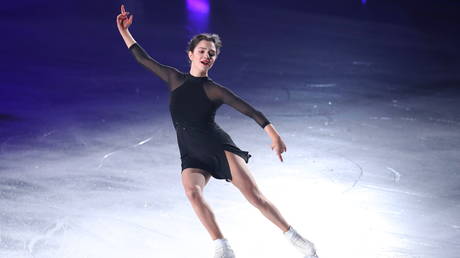 Ask your boss if you can go back t...

Secure your iPhone NOW – one quick...