UFC fighter Angela Hill said she found Israel Adesanya’s “dry-humping” celebration after beating Paulo Costa at UFC 253 to be funny, after Costa reacted with outrage to the footage.

Adesanya beat Costa via TKO in the second round of their middleweight title fight at UFC Fight Island and made a “humping” motion toward the Brazilian before engaging in taunts with his coaching team.

Asked for her take on the incident, a laughing Hill told media including RT Sport on Fight Island: “That was funny. I mean like, why be mad about that? The dry humping, there wasn’t any penetration.

“He didn’t actually, like, smack him with anything. It was miming, he was doing aggressive miming.”

The 35-year-old strawweight fighter added: “He was excited and I think this fight really got to him mentally. I think he had to dig deep into his zen state of mind and watch a lot of Naruto to really channel that inner ninja in him and beat up the bully, and then afterwards he celebrated beating up the bully.

It’s fair to say Costa, who lost his unbeaten record, didn’t see the funny side of the celebration, which he missed at the time as Adesanya was behind him when the fight ended.

He vowed “revenge” on the Nigerian in a furious Instagram post in which he labelled Adesanya as “human trash” and called the celebration a “disgusting action.”

Hill was also asked if there is a double-standard between the way Adesanya and fellow UFC star Colby Covington are treated by the media following the incident.

After his victory over Tyron Woodley on September 19, Covington referred to the Black Lives Matter movement as “domestic terrorists” and asked Nigerian-born fighter Kamaru Usman if he was contacted by his “little tribe” through “smoke signals.”

On the possibility of a double-standard, Hill said: “Oh yeah, oh yeah. I feel like there’s always gonna be that group of people who are mad at one group of people but not mad at another, and I don’t think I have to be explicit about what that is.

“I don’t know what to say about it, I have a different sense of humor,” she added. “The Colby thing didn’t make me laugh and that one did, and I don’t know how to explain it other than dry-humping doesn’t offend a group of people.”

Adesanya defended his UFC middleweight in the clash, extending his record to 20-0 in MMA. As for Costa, the defeat was the first of his MMA career in 14 fights. 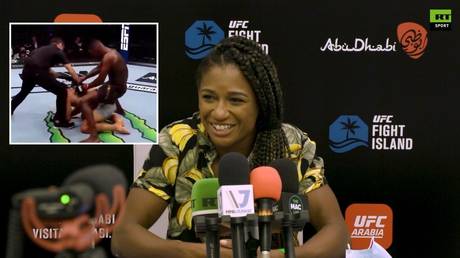