‘There is no need to burn him at the stake’: Russian Olympic champ Alla Shishkina defends Dzyuba over sex video row

‘There is no need to burn him at the stake’: Russian Olympic champ Alla Shishkina defends Dzyuba over sex video row

Synchronized swimmer Alla Shishkina has spoken in defense of football player Artem Dzyuba, who has been embroiled in a huge row over an intimate video, saying he shouldn’t be “burned at the stake.”

The 14-time world champion expressed regret that it was so easy nowadays to hack into social media accounts and steal private information from people’s phones.

“In the modern world, when a database containing people’s personal information can be so easily hacked, I’m not surprised that Х-rated videos are leaked online,” Shishkina said.

The Olympic gold medalist said that, though the video of Dzyuba in a private moment had been shared online, he hadn’t deliberately set out to offend or hurt anyone – after all, it was not his fault that his personal data had been stolen.

“In my opinion, if a person doesn’t harm others and doesn’t destroy anything, he shouldn’t be burnt at the stake. Next time, when you decide to make somebody infamous, please look in the mirror first,” Shishkina wrote.

Dzyuba has been in the public spotlight for all the reasons since a video of him pleasuring himself while filming himself on his phone surfaced online. The scandal has forced Russian football bosses to discipline the player by removing him from the national squad for three upcoming games. 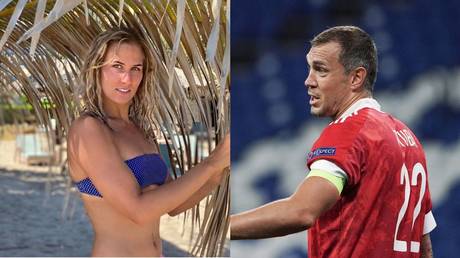