Embattled Manchester United ace Harry Maguire has spoken out about his arrest and guilty court verdict in Greece on social media for the first time, using Instagram to post a Buddhist quote over an aspirational piece of imagery.

England center-back Maguire used an early morning Instagram stories post to seemingly address his guilty charges of aggravated assault, resisting arrest and attempted bribery, posting a photo of a figure in a field silhouetted under a sun in a dark sky.

He appeared to strongly suggest that the truth about the case, which came about when he was detained in the holiday resort of Mykonos last week, had not materialized.

Harry Maguire hasn’t has he? Oh he has…

Pleaded innocence on Instagram Stories with a google image a 12-year-old would use in a break up. pic.twitter.com/o0PjE9epq9

Can we lock him up just for this cringe

“The sun, the moon and the truth.”

The 27-year-old’s views appeared to have been shared by his international manager, Gareth Southgate, who named the defender in his latest squad despite his arrest over an altercation outside of a nightclub.

While the initial selection of Maguire for the upcoming UEFA Nations League fixtures was being announced on Tuesday, judges in Greece handed him a suspended prison sentence of 21 months and 10 days.

Southgate said the “insights” he had into the incident were “very different to what’s been reported.”

Despite his defense of one of the stars of his side’s run to the 2018 World Cup semifinals in Russia, Southgate dropped Maguire from the squad later that day, adding that the move was “in the best interests of all parties”.

Lawyers for Maguire claimed that his sister, Daisy, had been injected with an unknown substance which caused her to collapse as part of the altercation.

Maguire will be appealing against the verdict, adding: “I remain strong and confident regarding our innocence in this matter – if anything, myself, my family and friends are the victims.”

“Can we lock him up for this cringe?” asked another.

United coach Ole Gunnar Solskjaer revealed last month that an analysis of Maguire’s social media accounts had been a factor in his decision to sign the player from Leicester City in an £80 million ($105 million) deal last summer. 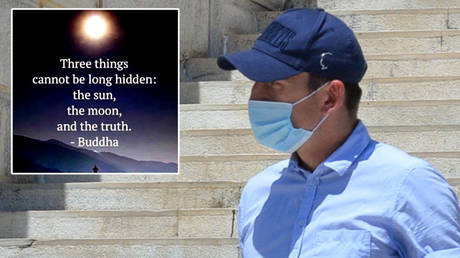