‘The starting bell was still ringing’: Fans in disbelief as bareknuckle boxing contest ends after just 3 SECONDS with KO (VIDEO)

‘The starting bell was still ringing’: Fans in disbelief as bareknuckle boxing contest ends after just 3 SECONDS with KO (VIDEO)

The bell had barely been rung before Donelei Benedetto found himself flat on his back in his short-lived bout with Uly Diaz at Bare Knuckle Fighting Championship 14.

It was a nightmare Friday the 13th for Benedetto as he was crumpled by Diaz just three seconds into their fight at the InterContinental in Miami.

Cuban brawler Diaz, 39, made good on his pre-fight vow to start fast, lunging at his opponent with a left jab as soon as the opening bell had sounded before following up with a swinging right hand to send Benedetto onto the canvas and out cold.

The starting bell was still echoing as this man hit the canvas 🤭 #BKFC14 pic.twitter.com/ODJs1FlN1H

“There’s that fast start… that might be it,” the commentary team exclaimed of the lighting-fast knockout which had just flashed in front of them.

Social media was just as dumfounded at the KO – which unsurprisingly was confirmed as the quickest ever in BKFC history.

“The starting bell was still echoing as this man hit the canvas,” joked one Twitter user.

“I can’t tell if that ring was the bell or him getting brained savage af,” wrote another.

One fan added: “Gotta be ready instantly in that savage organization!”

“What happened?! I BLINKED!!,” jested another combat sports fan.

Diaz improved to 2-0 in bareknuckle contests with his victory, while ‘King Kong’ Benedetto, 29, came crashing down to earth on his BKFC debut. 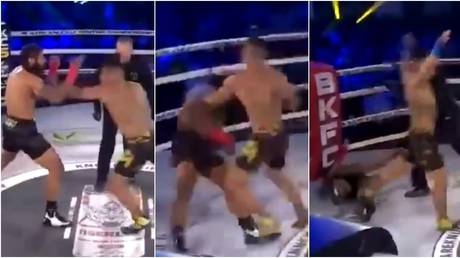