The show goes on: Fedor Emelianeko says the Russian passion for MMA will continue, despite Khabib’s retirement

The show goes on: Fedor Emelianeko says the Russian passion for MMA will continue, despite Khabib’s retirement

Legendary heavyweight Fedor Emelianenko says that Russian mixed martial arts will continue to prosper long after the retirement of UFC champion Khabib Nurmagomedov – but who will eventually fill the void when Khabib steps away?

Emelianenko remains one of the most influential figures in Russian combat sports owing to a near-flawless run in his prime in which he established himself as the consensus best heavyweight in the sport’s history.

‘The Last Emperor’, 44, remains an active fighter and last competed in December where he earned a first-round finish of fellow PRIDE alum Quinton ‘Rampage’ Jackson. Father Time, though, waits for no man and as he inches closer to his own retirement, Emelianenko has stated that Russian MMA is more than robust enough to survive without him – and even without reigning UFC lightweight champion Khabib Nurmagomedov.

Khabib’s retirement, which he tearfully announced in the cage following victory against Justin Gaethje last month, was considered by most to be set in stone – with the stoic Russian fighter considered unlikely to reverse his decision given the motivation for it, but with UFC boss Dana White continuing to hold out hope that Nurmagomedov will return to pursue an unparalleled 30-0 record Emelianeko says that when the times comes, Russian mixed martial arts will cope just fine.

“MMA has already gained its popularity and established itself as a particular sport with professional leagues,” Emelianenko outlined to the TASS news agency.

“Our [Russian] guys are holding fights in the top promotion events. I don’t think that the sport of MMA will lose its popularity [in Russia].”

Not only that, it can be argued that there has never been a more fertile period for Russian MMA. In addition to Khabib, another Russian, Petr Yan, also holds UFC gold. In Bellator, Fedor’s own protegee, Vadim Nemkov, holds the light heavyweight title.

But when the day inevitably comes, who exactly will fill the void of Russia’s two most well-known fighters? There are several candidates.

As noted above, Yan is one of two Russians currently holding UFC gold. He has been a revelation since joining the UFC from ACB in 2018, winning seven straight in the Octagon – most recently a fifth-round TKO of Brazilian legend Jose Aldo which earned Yan the bantamweight world title. He is expected to defend his crown against Aljamain Sterling next month.

The man who has been anointed by Khabib as his own successor. The 19-1 Makhachev has had a stop-start UFC career, having bowed out of fights for a variety of reasons including a staph infection which forced him out of last weekend’s UFC headliner against Rafael Dos Anjos. Regardless of his relative inactivity, big things are expected from the 29-year-old as his career continues to develop.

Another fighter we mentioned above, Nemkov has adapted his world class Combat Sambo skills into a 12-2 pro record and Bellator gold, which he claimed after he knocked out Ryan Bader in August. If he develops in the same manner as his mentor, Emelianenko, Bellator’s light heavyweight fold has a problem.

Is there a more exciting fighter in all of mixed martial arts? 18-1 featherweight Magomedsharipov has been perfect in the UFC to date but as of now isn’t quite active enough to be in world title contention. This is no fault of his own, though, as there has been repeated failures to get a fight with Yair Rodriguez off the ground. One suspects it is only a matter of time before the blisteringly exciting Dagestani is competing in high-stakes fights.

Another of Khabib’s training partners, Tukhugov gained notoriety (pun intended) when he was among those who stormed the cage following Khabib’s UFC 229 win against Conor McGregor a couple of years back, but there’s a lot more to Tukhugov than his cameo that night might have suggested.

Chechen-born Chimaev is perhaps the highest-charting new name on this list after he announced his arrival to the UFC with THREE wins in the span of just 66 days. The ever-confident ‘Borz’ now faces an opportunity to establish himself as a bona-fide welterweight contender: all he has to do is end the eight-fight winning streak of the third-ranked Leon Edwards.

A candidate for the second-best Russian heavyweight of all time, Volkov has looked impressive in his recent UFC run and put his hand up for title consideration with a clear cut win against Walt Harris in October.

The various other Nurmagomedovs

The fighting lineage of the Nurmagomedov clan won’t end when Khabib steps away from the game, with several of his cousins – Usman, Umar and Abubakar – all making names for themselves. Incredibly, the four Nurmagomedovs (including Khabib) have a combined career record of 67-3.

And you feel that there’s a lot more to come from Russia’s most famous fighting family. 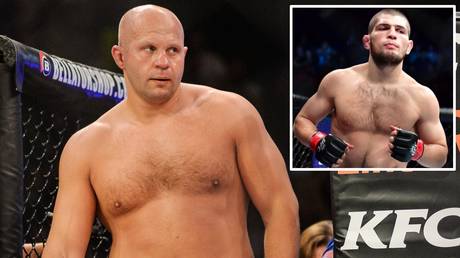