The sensitive issue of gender ambiguity: Why Caster Semenya’s testosterone battle could be pivotal for women’s sport

The sensitive issue of gender ambiguity: Why Caster Semenya’s testosterone battle could be pivotal for women’s sport

South African runner Caster Semenya is continuing her battle against World Athletics, which has implemented rules prohibiting female athletes with a naturally high level of testosterone to compete internationally.

The two-time Olympic champion is to appeal to the European Court of Human Rights to overturn the regulations, which she believes are discriminatory, as they require her to artificially lower her natural testosterone levels.

The runner, who is not eligible to compete internationally under the current regulations, insists that testosterone-suppressing medicine would make her sick, claiming the ban is a clear violation of her human rights.

Semenya has already lost two appeals in Switzerland’s Federal Supreme Court and the Court of Arbitration for Sport (CAS), which upheld World Athletics’ decision regarding the testosterone limit.

Her huge army of supporters continues to lash out at athletics bosses for their unfair treatment.

Semenya identifies as a woman, but has the male XY chromosome, rather than the female XX chromosome – this was officially confirmed in CAS’s press release, after it overturned the runner’s appeal.

The runner’s elevated testosterone level is the result of her biological specifics, known as the Difference in Sexual Development (DSD) – a group of rare conditions involving genes, hormones and reproductive organs, including genitals.

“The DSDs covered by the regulations are limited to athletes with ‘46 XY DSD’ – i.e. conditions where the affected individual has XY chromosomes,” the statement said.

Semenya has been at the center of controversy ever since her arrival on the international circuit in 2009, when she won the women’s 800m event, beating her closest rival by more than two seconds.

With her broad shoulders, deep voice, and prominent Adam’s apple, she immediately became the subject of constant scrutiny, with fellow athletes and medical experts alike speculating about her anatomy.

She was subjected to various sex verification tests, the results of which were supposed to be confidential, but reports leaked out revealing that the runner’s testosterone level was three times as higher than most women’s.

Now, with Semenya appealing the World Athletics ruling, some have expressed the concern that it could open the door for transgender and male athletes posing as women who are anatomically and genetically ambiguous in order to compete in women’s events.

“Yeah, will be great watching a load of 5ft, 16 stone women with beards doing the 100m,” one user wrote.

Yeah will be great watching a load of 5ft, 16stone women with beards doing the 100m

“Total misrepresentation of the rules. They are not a testosterone limit. They are rules which define when males with intersex conditions are permitted in the female category,” another person added.

Total misrepresentation of the rules. They are not a testosterone limit. They are rules which define when makes with intersex conditions are permitted in the female category.

Explaining its implementation of the testosterone limit rules, World Athletics has repeatedly stated that it had not intended to target Semenya specifically, and its aim had instead been to ensure fair competition in women’s events.

It said high testosterone gives Semenya and others an unfair advantage over athletes with testosterone in the more typical female range. 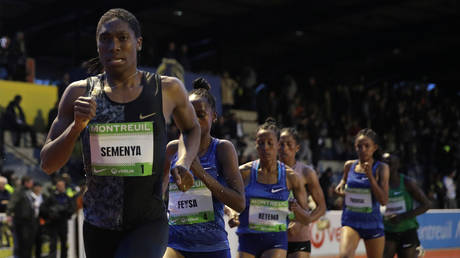 Britain could seal trade deal with...