Tiger Woods’ 11-year-old son Charlie has shown that the apple doesn’t fall very far from the tree in the Woods household, after the youngster decimated the field in a junior tournament in the US, winning by five strokes.

Charlie showed that he has picked up a thing or two from his 15-time major-winning father at the recent tournament in Hammock Creek, Florida, as he won with ease and showcased the potential that has led some to predict that he may one day outshine the achievements of his famous father.

Charlie, who is the son of Woods and his ex-wife Elin Nordegren, shot an impressive three-under-par 33 in nine holes – leaving the rest of the field trailing in his wake.

The youngster’s swing would put that of many adults to shame, with his father (and sometimes caddy) Tiger telling GolfTV that he sees his son as having a bright future in the sport.

“He’s starting to get into it,” Woods said.

“He’s starting to understand how to play. He’s asking me the right questions.

“I’ve kept it competitive with his par, so it’s been just an absolute blast to go out there and just, you know, be with him. It reminds me so much of me and my dad growing up.”

44-year-old Woods, perhaps the finest golfer of his – or any other – generation, also admits that he is envious of his son’s swing, saying that he can do things which have long been ruled out of his own repertoire by the ravages of injury.

“I wish I had his move,” he explained.

“I analyze his swing all the time. I wish I could rotate like that and turn my head like that and do some of those positions, but those days are long gone, and I have to relive them through him.“ 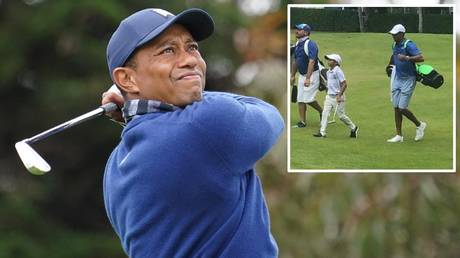