Defeat doesn’t come easy to Khabib’s family but that is the task facing England’s Nathaniel Wood this month when he attempts to hand a first career loss to the latest family representative in the UFC octagon, Umar Nurmagomedov.

When your nickname is ‘The Prospect’, it stands to reason that people might just want to see if you can back it up. Fortunately for Wood, the 27-year-old protege of UFC veteran Brad Pickett, he couldn’t have asked for a more dominant start to his career at MMA’s top table.

The former Cage Warriors bantamweight champion, who was known primarily for his slick stand-up game, demonstrated exactly why he is considered among Europe’s most promising fighters by claiming three successive submission finishes in his first three fights.

The first of which, a sublime D’Arce choke on a very unwilling Johnny Eduardo, was deemed by the promotion as being worthy of a $50,000 performance bonus.

His fourth fight, however, brought Wood crashing back down to earth. When he was finished by strikes in the third round by UFC veteran and two-time title challenger John Dodson.

For a young fighter like Wood, the sting of defeat can soon be tempered by positive action in the gym and a newfound resilience to recognize mistakes, learn from them and display improved technique next time around.

And according to a figure beloved in his home country, his coach Brad Pickett, Wood has all of the ingredients to become the next thing in English MMA.

“I’ve always looked at this kid and thought, ‘He has the talent,’ but you never know if they have it mentally. As a coach, I see it in a lot of fighters where a performance can just switch something in their mind.

Love what you do and you’ll never work a day in your life. @ufc @UFCEurope July 25th couldn’t come sooner. pic.twitter.com/2EVymmcojp

“It was just back in the day when I just retired, he was making his Cage Warriors return and he fought Vaughan Lee; Vaughan Lee being a UFC veteran. He looked so good in that fight against Vaughan Lee and I think that was a real turning point in his brain. He start thinking, ‘You know what? I could make it in the UFC’.

“It was just one of those things and when that switches in a fighter and they get that self-belief. He’s not cocky or arrogant, but he has that self-belief where he’s like, ‘I could do this,’ and from there he’s just better and better, and more dedicated as well.”

Wood will likely need to display these characteristics if he is to be the first man to defeat Umar Nurmagomedov in mixed martial arts competition when the pair meet in Abu Dhabi on July 25.

Umar shares several characteristics with his UFC champion cousin; namely a fondness for bringing fights to the ground to dominate opponents who tend to submit if the clock doesn’t expire first.

A repeat of this against a fighter as dangerous in all facets of the game as Wood, who is also more experienced than his Dagestani counterpart, would be a serious statement from Umar in his debut Octagon assignment.

If that is indeed to be the case, can we really still call Nathaniel Wood a prospect? 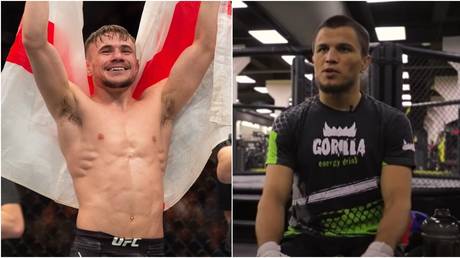