Close
Trending News
HomeSportThe Premier League continues ‘to take a knee’ – but is there any point anymore, and what comes next?

The Premier League continues ‘to take a knee’ – but is there any point anymore, and what comes next?

The Premier League continues ‘to take a knee’ – but is there any point anymore, and what comes next?

In the months since Project Restart returned football to the screens in front of empty stadiums, the game has been in a state of flux, as Covid-19 has wreaked havoc with the traditions and norms of the conventional calendar.

Transfer windows have run deep into Autumn, prestigious European competitions have been decided in one-legged ties at neutral venues, results have become increasingly unpredictable with the decline of home advantage, and multiple players have tested positive for the disease, Mohamed Salah and Kai Havertz among the most recent cases.

One constant however, since the death of George Floyd in Minneapolis, Minnesota, is players “taking the knee” at Premier League matches, a pre-match ritual that looks set to become as permanent as the before-game handshake.

Regardless of the merits or issues with the gesture itself, and the extensive debate around racism in sport and across wider society, fans could be forgiven for wondering what the point is behind its ongoing use.

Considering the attention the kneeling has received, to the point BBC’s Match of the Day still show the teams during the highlights, it is incredible that there is no specific list of goals or ambitions which the players want implemented for tackling racism and reducing inequality.

For every moving discussion or speech about discrimination and prejudice black players have faced, there is no real galvanizing momentum pushing the footballing authorities to do anything. Whether it is a matter of representation, or the development of new anti-racism schemes, or tougher penalties for people accused of racist language in the stands or out on the pitch, none of this can reasonably be debated as no collective group players has asked for it.

It could just be as general as ending all racism, if so we could all be kneeling for an awfully long time.

Consequently, taking the knee is a gesture at an impasse. The Premier League remains committed to it, a statement was even put out in support of it before the season started, yet no one really has any idea what the motivation is aside from simply as an expression of solidarity for a murder thousands of miles away, many months ago which has morphed into a much broader discussion about the foundational values of Western democracies.

This is not to say there has been no engagement elsewhere. You can look across the football landscape for both pushback and for statements of support.

In October, during the second week of Champions League ties, only four players took the knee for FC Krasnodar before their home match against Chelsea, while Marseille stood together in solidarity at the half-way line while the Manchester City players continued to kneel. This reflects a generally more mixed attitude to the protest on the continent, and across its domestic games.

Further down the footballing food chain, in the Championship, at a broadcasted game between Coventry and QPR in September, the two teams elected not to take the knee, despite the consternation of Sky Sports’ pundits and reporters. This was followed up by QPR’s director of football, Les Ferdinand, issuing a strongly worded statement the following day. He argued that the meaning of the statement had been diluted and that it now meant little more than a nice pin or badge, due to the lack of action that has followed.

More recently, Liam Bridcutt and Britt Assombalonga, two black players who are captains of Lincoln City and Doncaster Rovers respectively, also question the usefulness of the gesture. This attitude is increasingly reflected in how teams are acting lower down the football food chain. In nine of the 11 Championship fixtures last weekend, both teams took the knee, but in the FA Cup which features teams in divisions as low down as the Isthmian League North Division only 9 of the 27 ties had both teams taking the knee.

Conversely, the United States men’s national team wore multiple social justice slogans such as “Spread Love Not Hate” on the back of their warm-up jackets before their friendly versus Wales, the only notable factor in a stale 0-0 draw, while England and Ireland dutifully took the knee at Wembley.

Nevertheless, the USA-Wales game seems to be almost isolated towards the trends away from social justice statements. The Premier League increasingly seems an outlier in its commitment to the gesture of taking the knee, which is unusual considering it has no substantive policy goals behind the measure.

The truth is the players have had plenty of possible ‘outs’ that they could have used if they so wished. Several players of color have criticized its value, multiple sporting authorities have reiterated their commitment to concepts like diversity, equality and inclusion, while the start of a new season could easily have been perceived as a line under the matter.

Yet, here we are, in November, approaching Christmas, with players in the Premier League continuing to bend down before each game. So, their commitment to it could be deeply held, even if no one fully understands what the commitment is to. This is no small thing, while the political statement may attract praise from legacy media, football authorities and Twitter activists, the reality is there is very little polling on what fans actually think of the gesture, and when they finally return to stadiums, the reaction to players continuing to take to the floor before kick-off could be rather telling. 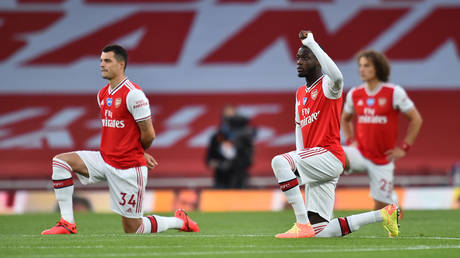