‘The most protected player in the world’: Fans fume as Messi escapes red card for SECOND game in a row after nasty STAMP (VIDEO)

‘The most protected player in the world’: Fans fume as Messi escapes red card for SECOND game in a row after nasty STAMP (VIDEO)

La Liga officials have been accused of affording Lionel Messi special protection after the Barcelona ace avoided a red card for a second game in a row despite stamping on a rival in Tuesday’s win against Athletic Bilbao.

Chasing a loose ball in the 69th minute at the Nou Camp, Messi went in late on Athletic’s Yeray, bringing his studs down on the defender’s ankle.

Yeray span around in agony at the challenge, with Messi immediately returning to the scene to apologize.

Despite the presence of VAR, the Barcelona skipper avoided even a booking for the offence, and to rub salt into the Athletic wounds, it was Messi who set up subsitute Ivan Rakitic for the game’s decisive goal just two minutes later.

Many fans online – including a fair few with profile pictures bearing the image of Cristiano Ronaldo – were left fuming at Messi’s let-off for the challenge, claiming the star number 10 is given preferential treatment by officials after similarly escaping punishment in Barcelona’s last game against Sevilla, where he shoved rival Diego Carlos to the ground.

Didn’t even received a Yellow Card.

Messi is the Most Protected Player by LaLiga and the Media. pic.twitter.com/ihPAHRafwF

Cristiano Ronaldo got a red card for touching a player’s hair.

Lionel Messi slaps a player, pushes a player and stomps a player without even getting a YELLOW card let alone a RED.

Damn, second game in a row that Messi is getting away with a red card offence pic.twitter.com/5SJ8mOkeA4

Messi has in fact only ever received two red cards in his entire career, both of which came in national team colors for Argentina, although that may be unsurprising considering his refined game doesn’t exactly lend itself to full-throttle challenges.

The six-time Ballon d’Or winner was sent off just two minutes into his senior Argentina debut in 2005, and also saw red in the Copa America last summer for a clash with Chile’s Gary Medel.

So far this campaign, he’s picked up three yellow cards in 26 league games, and a further two in the Champions League.

Chasing his 700th career goal in Tuesday night’s encounter, Messi again drew a blank as he spurned two late chances, but was on hand to set up Rakitic as Barca secured the win they needed to return to the top of La Liga ahead of title rivals Real Madrid’s game against Mallorca on Wednesday evening. 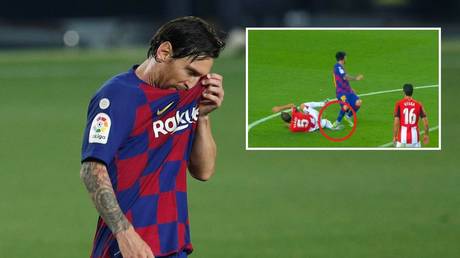