‘The most beautiful woman on Earth’: Cristiano Ronaldo WOWED by girlfriend’s bikini shot

‘The most beautiful woman on Earth’: Cristiano Ronaldo WOWED by girlfriend’s bikini shot

Portuguese football icon Cristiano Ronaldo has been sunning himself on a luxury yacht with his girlfriend Georgina Rodriguez – and also found the time to express his adoration for her on Instagram.

The Juventus superstar left a comment under Rodriguez’ Instagram post where the model, the mother of Ronaldo’s daughter, poses in a black bikini off the coast of Madeira.

“You are the most beautiful woman on Earth,” Ronaldo wrote under the picture, which has gained almost three million “likes.”

The five-time Ballon d’Or winner has been with the Spanish model since 2016, after breaking up with long-time partner, Russian model Irina Shayk.

The couple met at a Gucci store in Madrid, Spain where Rodriguez was working as a shop assistant.

Their relationship blossomed and the pair were regularly spotted together by the paparazzi from late 2016 onwards.

In 2017 the Spanish-Argentine model gave birth to the couple’s daughter Alana Martina, and is also helping to raise Ronaldo’s other three children.

Last month Rodriguez posted a photo of herself basking in the sun, flashing a massive diamond ring, and sparking rumors of a possible upcoming wedding. 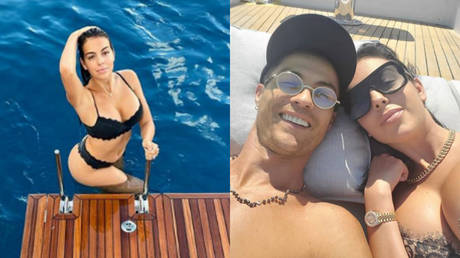