Jon Rahm is heading into The Masters tournament at Augusta on the crest of a wave after sinking TWO holes in one during the build-up to the main tournament in Georgia.

Rahm made a 224-yard hole-in-one during his Monday practice round with Rickie Fowler and Brendon Todd, then bettered that achievement on Tuesday during the traditional pre-tournament pond-skipping challenge at the par-three 16th hole.

The challenge, which requires players to hit their shots so they skim across the surface of the water, is a nearest-the-pin style challenge, but Rahm made sure that even the closest effort would be consigned to second place as he nailed his shot to perfection.

His second in two days, Jon Rahm skips his way to a hole-in-one at No. 16 – on his birthday, no less. #themasters pic.twitter.com/rtefAN5XtH

The ball skimmed four times across the water before arriving on the green and rolling down the gradient and into the hole for one of the most remarkable aces we’ve seen in a long time.

While perfecting technique and being consistently accurate is the ultimate test for any golfer, the world’s top players have the ability to perform remarkable shots, whether it’s skimming water or precision landings.

Golf’s European Tour looked to showcase that fact a few years ago with a short series of fun videos testing some of the Tour’s stars as they looked to perform quirky trick shots to match the Tour’s strapline, “See every shot imaginable.”

One of the tests was a water-skimming challenge but, rather than hitting a green, the players had to skim the water and hit a gong in the middle of a Scottish Loch from 200 yards away.

Rahm’s two holes in one in successive days should put him in confident mood as he heads into the iconic tournament, and the Spanish star said he’s keen to bring the win home for his nation after his fellow countryman Sergio Garcia was forced to withdraw from the competition due to COVID-19.

“There’s such (a) Spanish history of champions here, with three great champions and three idols of mine, that I would love to be able to add my name to that list,” said Rahm, who finished tied for ninth in 2019.

“Especially this year, being a little bit sad that Sergio is not going to be able to be part of this. My heart goes out to him.”

Rahm, whose pond-skimming ace took place on his 26th birthday, said that he takes inspiration from the great Seve Ballesteros, who won The Masters in 1980 and 1983, and led Team Europe to victory in the 1997 Ryder Cup in Spain.

“I owe everything to that week. I’m here because of that week,” Rahm explained.

“I try to always make my part and hopefully still grow the game in Spain and around the world.

“You don’t need to play perfect golf to win at Augusta National. You just need to stay true to yourself and just play the best you can with what you have at the moment.

“I’ve erred about being too aggressive in the past, and I’ve made birdies, but I’ve also made some big numbers.” 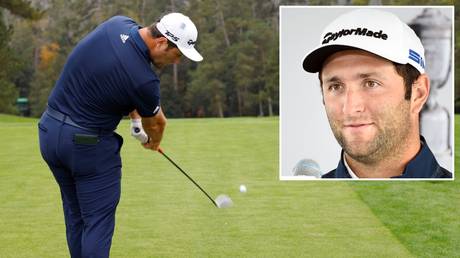