‘The loss of a father, coach & dedicated supporter of the sport’: McGregor pays tribute after death of Abdulmanap Nurmagomedov

‘The loss of a father, coach & dedicated supporter of the sport’: McGregor pays tribute after death of Abdulmanap Nurmagomedov

Conor McGregor, the heated rival of UFC champion Khabib Nurmagomedov, has issued a statement on social media in which he offers his condolences on the passing of ‘dedicated supporter of the sport’ Abdulmanap Nurmagomedov.

The patriarch of the Nurmagomedov family’s passing as a result of Covid-19 complications was announced on Friday and despite an ongoing feud between himself and Khabib, which at times threatened to consume the sport, McGregor detailed his sadness at the death of the 57-year-old with a brief statement on social media.

“The loss of a father, a coach, and a dedicated supporter of the sport,” McGregor wrote.

The loss of a father, a coach, and a dedicated supporter of the sport. Condolences and rest in peace Abdulmanap Nurmagomedov.

McGregor had previously stated that he was praying for the recovery of Abdulmanap, but weeks later, while responding to a jibe from Khabib’s cousin Abubakar, also suggested that Khabib was using the his father’s illness as a smokescreen for not wanting to return to active competition.

Abdulmanap had previously admonished his son for his part in the post-fight brawl which followed Khabib’s title defense against McGregor in October 2018, and also later said that despite the heated back-and-forth between the two fighters McGregor would be welcome to travel to Dagestan to train.

“I forgive Conor McGregor, it’s all in the past. You must make an analysis of everything that went on and take lessons on board,” Abdulmanap was quoted as writing in an Instagram post. 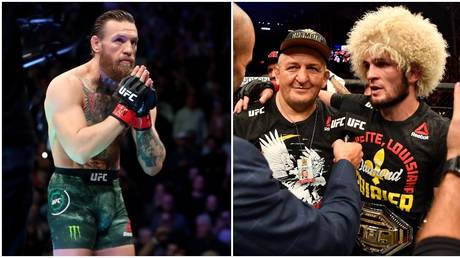