The joy of SIX! Bayern Munich edge past Paris Saint-Germain to WIN UEFA Champions League for the first time in seven years (VIDEO)

The joy of SIX! Bayern Munich edge past Paris Saint-Germain to WIN UEFA Champions League for the first time in seven years (VIDEO)

A perfect season has ended in Bayern Munich becoming the first team ever to win a treble of domestic and European cups twice, seeing off a spirited and dangerous Paris Saint-Germain side to claim a sixth Champions League title.

Eleven wins, a 500th goal in the competition and the trophy. Bayern Munich have deservedly won the Champions League, beating a Paris team that provided the sternest test yet of their all-conquering campaign.

They even did it without a goal from Robert Lewandowski, the talisman with goals in nine consecutive Champions League matches to his name entering the final.

For the first 20 minutes, Paris were the better team in Lisbon, defending stoutly and breaking forward at speed. Neymar, the much-questioned forward who had answered some of his critics on their post-lockdown run to the final, broke clear before his low shot from the left hand side of the penalty area was smartly blocked by Manuel Neuer.

Lewandowski went closer, waiting a full 21 minutes to threaten the 16th goal of his Champions League season. Turning quickly inside the penalty area, the runaway tournament top scorer thudded a shot off the turf on the turn, the ball beating Navas but thumping off his right-hand post and back out.

Undeterred, Paris continued their neat interplay in dangerous areas. A trio with the fastest of feet, Neymar, Herrera and Di Maria combined nimbly on the edge of the penalty area before the Argentine smashed over the bar from close range on the right.

Much of the pre-match talk had been around the firepower contained by both teams. The first half was hardly cagey, but a count of one shot on target by either side as half-time approached demonstrated how each side had kept their opponents at bay.

In the final moment, though, Mbappe had a chance that he might have dreamed of the night before his first Champions League final.

Bayern gave possession away inside their half, Herrera again showed exceptional awareness to return a pass to Mbappe rather than shoot, and the unmarked striker shot straight at Neuer.

He was almost cruelly punished. Lewandowski bounded onto a loose ball well inside the Paris half on the right, advanced and fired a venomous low cross into the penalty area that Navas did well to hold on to.

The breakthrough came just before the hour mark. Joshua Kimmich had time to size up his targets just outside the area on the right, looping a cross towards the far post, where Kingsley Coman had found space behind Thilo Kehrer as Bayern loaded the penalty area.

An unexpected replacement for Ivan Perisic, the winger had time to plant a firm header into the corner of Navas’s net.

No-one really knew whether Hans-Dieter Flick was joking when he explained that he had chosen Coman because he would have extra motivation against his boyhood club. The Bayern boss will claim a masterstroke. Coman was replaced minutes later, expectations exceeded and job done.

For a while, perhaps understandably, Paris were rattled. Thiago Silva, playing his final match for the club before a possible switch to Chelsea, cleared off the line.

They regrouped as Di Maria played another perceptive pass inside the penalty area, Marquinhos being denied with a low shot from the right by Neuer, who blocked with his legs again.

By the standards of these sides, the quality on show became ragged in the intense heat. Neymar personified Paris’s desperation, looking increasingly frustrated as the minutes dwindled.

Lewandowski grinned at Thiago as he won a free-kick outside the penalty area, tapping his left boot in mild exasperation after winning precious time.

He looked, as he has all season, supremely confident. Bayern held out, their pressing paid off, and a sixth Champions League title is theirs. 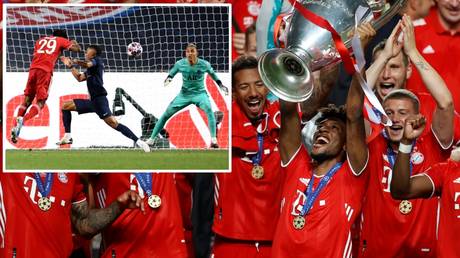 Young terrorists who murder can ge...