The heat is on: Handing Edinson Cavani the No. 7 shirt reveals Manchester United’s DESPERATE need for a hero

The heat is on: Handing Edinson Cavani the No. 7 shirt reveals Manchester United’s DESPERATE need for a hero

As if there wasn’t enough pressure on Edinson Cavani to deliver at Old Trafford, the new Manchester United striker has been handed the club’s iconic No. 7 shirt. Will it inspire him, or become a millstone around his neck?

United’s rich history has seen the likes of George Best, Eric Cantona, David Beckham and Cristino Ronaldo all perform heroics while wearing the No. 7 shirt for the Old Trafford club and, with United desperate to claw their way back to the very top of the English game – and with fans getting increasingly frustrated at the way the club has been run – Cavani appears to have been anointed as the next fan hero.

That decision appears to have come more from the suits in the boardroom than the fans, however, with aging striker Cavani, whose best years are already in the rear-view mirror, being held up as the superstar signing who can turn around the club’s fortunes.

The signing, however, would likely not have happened if United had managed to sign Jadon Sancho, but their lengthy pursuit of the Borussia Dortmund and England front man failed to produce a signed transfer sheet, forcing United to hastily dive in and sign Cavani at the end of the transfer window.

Now the club has handed Cavani the No. 7 shirt, all eyes will be on him when he takes to the field. And while the that particular jersey may carry significantly more historical weight than other numbers, the man himself insists he won’t let the responsibility of following in the footsteps of Best, Cantona, Beckham and Ronaldo place undue pressure on him.

“I know that once you’re out on the pitch, the number you have on your shirt has no influence,” the 33-year-old striker told the United website.

“But when you get the chance to pull on the No. 7 shirt at United… it really is a nice responsibility to have. I hope that I can do it great justice and leave it in as high regard as the many great players who have worn it before me.”

Very proud to be part of this great team and looking forward to wear this beautiful shirt.

Cavani may be saying all the right things, but make no mistake, by handing him the No. 7 jersey, United are signaling to the fans, and the rest of the football world, that Cavani is their No. 1 star, and he will be expected to deliver as such as United try to mount a challenge at the sharp end of the English Premier League this season and beyond.

He hasn’t taken to the field in a United shirt yet, but the pressure is well and truly on. 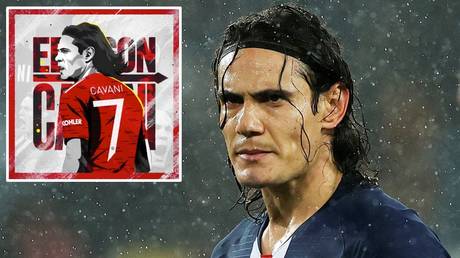