‘The guy’s legit’: Michael Chiesa praises ‘dual threat’ Khamzat Chimaev but says he can understand reluctance to fight him (VIDEO)

‘The guy’s legit’: Michael Chiesa praises ‘dual threat’ Khamzat Chimaev but says he can understand reluctance to fight him (VIDEO)

Michael Chiesa believes rising UFC star Khamzat Chimaev is the real deal, but said he can understand his fellow fighters’ reluctance to face him in the octagon from a business standpoint.

Stephen ‘Wonderboy’ Thompson, ranked No. 5 in the UFC’s welterweight fold, recently said he is not interested in fighting the unranked newcomer, a sentiment echoed by former interim welterweight champion Colby Covington.

Chiesa has been impressed by the credentials he’s seen from the Russian-born Chimaev, but he can understand where Thompson is coming from.

“But you can see things from Wonderboy’s side of things too. He’s earned his spot, he’s put his time in, he’s fought for the title a few times.

“I think the fans are easy to jump on him, as they always are, to say ‘you’re a p*ssy, you need to fight this guy,’ well dude he earned his spot through a lot of hard work, through some losses through some wins, can you blame the guy?

“But at some point, somethings gotta give, matchups gotta get made. The division’s gotta get some movement.”

Asked if he would accept a fight with Chimaev if approached or whether he would prefer to fight someone above him in the division, Chiesa – ranked eighth at welterweight – said: “You’ve got to think about it like this: he beats a guy, like a veteran. Hypothetically let’s say he beats a Wonderboy, now it’s lucrative, now it’s like hell yeah, now he’s proven he’s the real thing.

“But it’s like, I lay it on the line, he beats me he takes my spot, I beat him it’s like ‘oh, it’s a flash in the pan,’ you know what I mean? And I probably don’t move up the rankings either.

“I’m trying to fight for a world title, you gotta do smart business.

“But the guy’s legit, I respect the skills, I just don’t know if he’s the fight I would want right now.”

He dismissed the idea that he or his fellow fighters are scared of entering the octagon with ‘Borz.’

“There’s not a guy on the roster that’s afraid of anybody,” he said. “F*ck no dude, this is the fighting business, we’re all here for a reason.”

Chimaev has caused quite the stir since he made his UFC debut in July, when he dominated John Phillips in a middleweight bout and secured a second-round submission victory.

He then sensationally fought and beat Rhys McKee at welterweight just 10 days later, before returning to middleweight to record a 17-second knockout of Gerald Meerschaert in September. 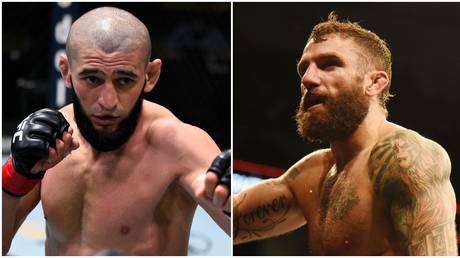