The Russian stage of the International Skating Union (ISU) Grand Prix series – the Rostelecom Cup – has been called the toughest event of the season after recent amendments brought together the best female skaters under one roof.

The battle for the coveted spots in the Grand Prix final is expected to unfold in Moscow in November, when the country’s best female skaters will face each other at Megasport arena during the Rostelecom Cup stage.

The Covid-19 pandemic and travel restrictions forced the ISU change its rules, allowing Grand Prix host countries to run events with “domestic skaters and skaters who train in the host country or respective geographical region.”

The newly adopted rules, aimed at saving the figure skating competitive season amid the coronavirus crisis, converted the Russian Grand Prix stage into the “group of death,” where more than 10 female athletes will fight for podium places.

Russia, which has been dominant in women’s skating in recent years, had four out of six competitors in the Grand Prix final last year.

With so many top-class skaters competing at one event, the Rostelecom Cup is expected to be the toughest and most intriguing Grand Prix event, with an absolutely unpredictable outcome.

Japanese Nikkan Sports even compared the Russian stage with Sengoku Jidai – a turbulent and violent period of constant civil war and social upheaval.

Due to the Covid-19 pandemic, the ISU also postponed the Grand Prix final, which was scheduled to take place in December in Beijing. The competition could potentially be cancelled if the coronavirus still remains a threat in the coming months. 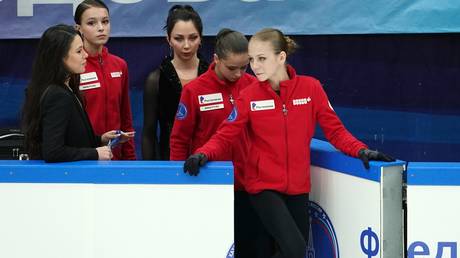