‘The FA is stuck in the dark ages!’ Greg Clarke RESIGNS as FA chairman following ‘unacceptable language’ about black players

‘The FA is stuck in the dark ages!’ Greg Clarke RESIGNS as FA chairman following ‘unacceptable language’ about black players

Chairman of the UK’s Football Association, Greg Clarke, has resigned following a furor regarding allegations of him using racially insensitive language when discussing black players.

Clarke apologized for using the term “colored footballers” during a video link conference to discuss the scourge of racism in the sport with the the Department for Digital, Culture, Media and Sport (DCMS) select committee, saying that he was “deeply saddened” by his “unacceptable” language. He added that his comments did a “disservice to our game“.

Clarke was initially asked to apologize by MP Kevin Brennan, who was present on the call, with Clarke doing so. Brennan later said that Clarke’s choice of words did not promote inclusion in the game, while committee member Alex Davies-Jones described the language as “abhorrent“.

Englishman Clarke, 62, succeeded Greg Dyke as FA Chairman in 2016 but admitted his error in a lengthy resignation letter, in which he said: “My unacceptable words in front of Parliament were a disservice to our game and to those who watch, play, referee and administer it. This has crystallized my resolve to move on.

“I am deeply saddened that I have offended those diverse communities in football that I and others worked so hard to include.”

No surprise Gregg Clarke has resigned as FA chairman, that organisation needs a massive clear out it is still stuck in the dark ages

Gregg Clarke may have resigned but he’ll be replaced by someone from the FA conveyor belt. Serious reform needed at the top not just wishy washy slogans

Clarke was the target of further criticism for comments which suggested gay players were making a “choice” and that female footballers did not like having the ball kicked at them with force. He has also previously described the concept of systemic racism as “fluff“.

Racial equality watchdog Kick It out said that Clarke’s comments should be “consigned to the dustbin of history.”

“I was particularly concerned by the use of lazy racist stereotypes about South Asians and their supposed career preferences. It reflects similar lazy stereotypes I have heard have been spouted at club academy level,” Sanjay Bhandari, executive chair at Kick It Out, said.

“Being gay is not a ‘life choice’ as he claimed, too. The casual sexism of saying ‘girls’ do not like balls hit at them hard is staggering from anyone, let alone the leader of our national game. It is completely unacceptable.”

The FA have confirmed Clarke’s resignation and said that Peter McCormick will take over chairmanship in a temporary capacity before they begin identifying candidates to succeed Clarke permanently. 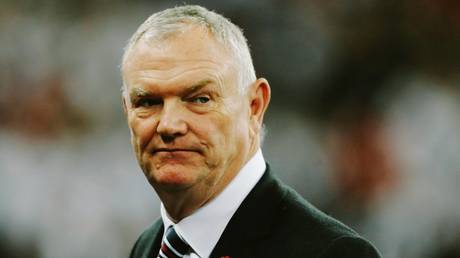