‘The decision is final’: Lionel Messi tells Barcelona he wants to LEAVE on a free transfer

‘The decision is final’: Lionel Messi tells Barcelona he wants to LEAVE on a free transfer

Lionel Messi’s two-decade association at Barcelona appears to have met an inauspicious end after the six-time Ballon d’Or winning forward told club officials that he intends to leave the club, according to reports.

Speculation as to Messi’s future has been rampant amid a disastrous 2020 for the Catalan giants, which saw them surrender their Spanish title to arch-rivals Real Madrid and endure a humiliating 8-2 Champions League exit at the hands of Bayern Munich.

The club appears braced for more internal strife, however, after strong reports emerged on Tuesday that Messi has told the Barcelona board that he wants to leave the club by August 31 following crunch showdown talks with new head coach Ronald Koeman.

Messi is understood to have been taken aback by Koeman’s stance that Messi’s time of “privilege” is over, and that any previous “flexibility” is now over, reports Marca, and told the team via Burofax that he intends to leave the club.

Messi had the clause in his contract to leave at at the end of the 19/20 season. Barcelona claim it expired on June 30 but with the extension to this season season Messi claims he can execute it until Aug 31 [via @JPVarsky]

“Lawyers, banks or anyone who wishes to send a communication recognised as a legal document in Spain, use a Burofax” https://t.co/LCLbPwszPb

Furthermore, Messi is reported to have alerted Barcelona to his interpretation of an exit clause in his contract which allows him to leave the club for free at the end of any campaign. Barcelona had maintained in the past weeks that this clause had expired, meaning that Messi was contractually tied to the club until next summer.

However, Messi is understood to have claimed that the Covid-19 extension to the Spanish domestic season means that he can action his exit clause until August 31. It is expected that Barcelona will object to this stance.

Should the free transfer clause in his contract be confirmed, it will signal the start of what one assumes might be the most furious, and brief, transfer hunt in recent memory.

Messi, widely regarded as the greatest footballer in history, would fit into practically any team on the globe – but the Argentine’s presumed wage demands and signing-on fee would limit his potential list of destination to one of a handful of ‘superclubs’ across the continent.

Paris Saint-Germain, Bayern Munich, Manchesters United & City and even David Beckham’s Inter Miami have been mooted as potential destinations for the mercurial Messi – but regardless of where he ends up, it is looking increasingly likely that his iconic spell in Barcelona has met a definitive end. 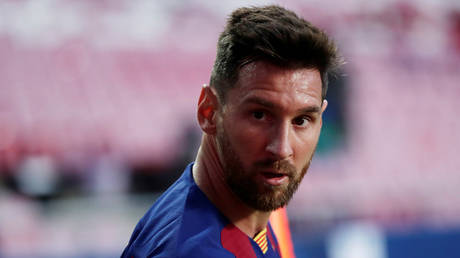 Rescuers cheer as 4yo boy pulled a...