Khabib has since hung his gloves up and announced his retirement in 2020 following an impressive title defense against Justin Gaethje at UFC 259.

The decision was part of a promise to his mother not to continue without father Abdulmanap in his corner, after the legendary coach passed away due to coronavirus complications last summer.

But the rivalry between Khabib and McGregor appears to be stronger than ever, with the Irishman taking to social media to deliver a series of potshots at the 29-0 GOAT contender.

On Twitter, ESPN MMA journalist Brett Okamoto shared a video from 2018 when Khabib has just been crowned champion by defeating Al Iaquinta at UFC 223.

Three years ago today, Khabib Nurmagomedov (@TeamKhabib) became a UFC champion, but of course, the incident with Conor McGregor (@TheNotoriousMMA) and the bus from two days before was still on his mind. What a week that was. pic.twitter.com/16ogUA8xk4

But rather than being in a celebratory mood, a clearly-riled Khabib threatens to “humble” McGregor following an incident two days before fight night.

After Khabib confronted his friend Artem Lobov backstage at media day, in the build-up to the PPV card in Brooklyn, McGregor attacked a bus containing Khabib and other UFC stars with a metal dolly.

This led to Khabib famously demanding from McGregor “send me location” to settle the score, and while the two did not meet until October that year, humble him he did with a brutal hiding at UFC 229 ended by a neck crank submission.

Learning nothing from the experience, McGregor still tries to wind Nurmagomedov up wherever he can, commenting on Okamoto’s post: “The Dagi on the bus goes poo poo poo, all thru the town.”

“Get this man a T-shirt! And a nappy for the bus,” he commented elsewhere in a now-deleted message, in reply to a near-seven-year-old Khabib tweet where the grappler asked for some ‘Notorious’ merchandise.

McGregor also mocked Khabib’s legacy, when his retirement was finally recognized by Dana White in March.

“Happy retirement, kid – smell ya later,” he wrote on Instagram, alongside a snap of the pair in younger, more harmonious times.

“Never forget who came in the game and made ye. Straight from my big Irish balls,” he added.

With Khabib now out of the way, McGregor will attempt to become champion of the division once more by first seeing off Dustin Poirier on July 10 in a trilogy decider.

KO’d by ‘The Diamond’ in January, after beating him in 2014, striking revenge should instantly place Mystic Mac in a title tilt against new champion Michael Chandler or Charles Oliveira. 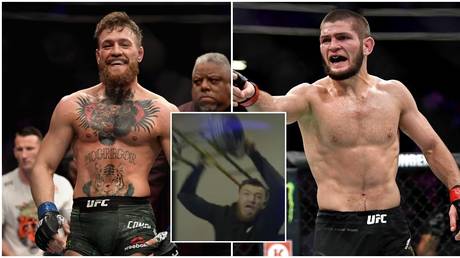 US agrees to withdraw 'remain...