UFC lightweight champion Khabib Nurmagomedov chatted to reporters in Moscow on Friday, Aug. 14 as he discussed a range of topics, including his UFC future, rival Conor McGregor and the tragic death of his father, Abdulmanap.

Nurmagomedov remains undefeated, with 28 career wins and zero defeats, and has cemented his position as the UFC’s 155-pound king with victories over Dustin Poirier in 2019 and McGregor in 2018 after his title-winning performance against Al Iaquinta at UFC 223.

The 31-year-old has been a pathfinder for Russian athletes on the world stage, and is rated as one of the best pound-for-pound fighters on the planet.

His rise to the top of the sport came with his father and coach, Abdulmanap, by his side. But when Abdulmanap tragically died following complications linked to COVID-19, doubts were cast over Khabib’s fighting future.

“The Eagle” addressed his emotions, and his thought processes, as he clarified how he intends to progress with his career, as he chatted about his upcoming bout with interim lightweight champion Justin Gaethje, as well as potential matchups with the likes of McGregor, Georges St-Pierre and Floyd Mayweather.

Recap Khabib’s press conference, in full, via the video above. 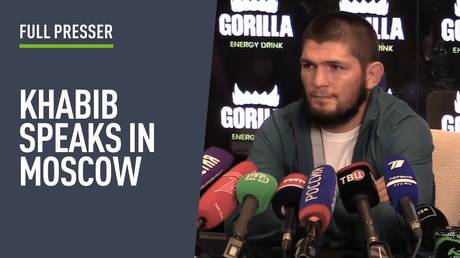