UFC president Dana White has signaled the promotion could extend its stay on Fight Island in Abu Dhabi “easily into next year,” saying he is even looking at buying property in the UAE.

The UFC kicks off its long-awaited set of events from Yas Island in the UAE capital this weekend with a stacked UFC 251 card featuring three title bouts.

The venue has been in the making since the Covid-19 outbreak effectively shut down sport in the US, and with uncertainty over a second wave across America, White says his island masterplan will likely be needed for the long haul.

“Yeah, September, October (we’ll be here),” White said at a press conference ahead of this weekend’s action.

“Listen, they just shut down Las Vegas again. All the bars just shut today. We’re like back on page one.

“If California and stuff shuts… I don’t see anytime soon people are going to be flying in from all over the world to the United States.

“We’re going to be here easily into next year.”

White also revealed he was using his latest visit to Abu Dhabi to look at property in the area, eyeing up a house or a condo.

“We’re going to be here for a while, it’s why I’m buying a house,” he told reporters including RT Sport.

A title-heavy UFC 251 card is headlined by the welterweight showdown between champion Kamaru Usman and challenger Jorge Masvidal, with the featherweight title rematch between Alexander Volkanovski and Max Holloway serving as the co-main event.

Fights will be held on Sunday morning local time, which will be Saturday night in the US.

Other events already confirmed for Yas Island are Fight Night cards headlined by Dan Ige and Calvin Kattar on Wednesday, an event topped by Deiveson Figueiredo and Joseph Rolando Benavidez next Saturday, and a show headlined by Robert Whittaker and Darren Till on Saturday July 25 (all US time). 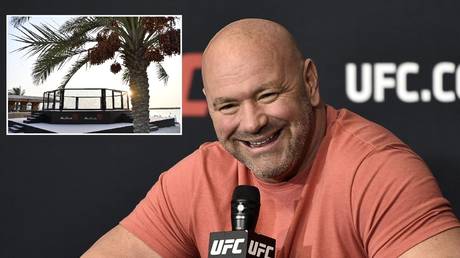