Dan Hooker may have ended up on the wrong end of a decision in the main event of UFC Vegas 4, but he made sure to send a message to his fans as he relaxed with his fans after returning from hospital following the fight.

Hooker went all five rounds with former UFC interim lightweight champion Dustin Poirier in a Fight of the Year contender in Saturday night’s main event at the UFC Apex.

But despite starting the better of the pair, Hooker lost out on all three scorecards as he suffered only his second loss as a UFC lightweight.

With a nasty gash above his right eye that required stitches, and a swollen nose and mouth, Hooker looked decidedly worse for wear after his grueling battle with Poirier.

But that didn’t stop the affable Kiwi from pulling out his phone and recording a message for his fans after his thrilling performance on Saturday night.

“Hey everyone. Just back at the hotel with the lads, having a feed,” he began.

“I got checked out of the hospital – everything’s all good. Just a couple of stitches on the eye.

“Buy, hey. That’s the game we play. No worries! It’s just a small setback and I’ll be back.”

Hooker had hoped that victory over the last man to challenge Khabib Nurmagmedov would earn him a future shot at the undefeated Russian UFC champion, but despite suffering the pain of defeat after a punishing five-round war, he seemed in excellent spirits after the fight.

That may have been in part down to the news that he and Poirier had each banked a $50,000 bonus for the Fight of the Night. 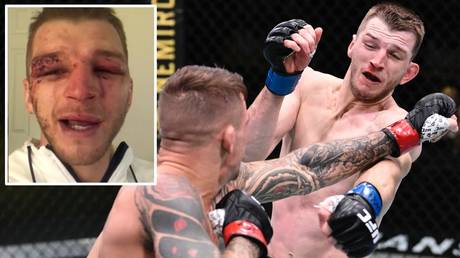