Dana White said drafting in Jorge Masvidal to face UFC welterweight champion Kamaru Usman on “UFC Fight Island” at UFC 251 meant it will give fans “the fight the people want to see” at UFC 251 this weekend.

UFC president White has spoken for the first time since the confirmation of the newly-booked welterweight title fight between Kamaru Usman and Jorge Masvidal, and appeared to put his previous pay dispute with “Gamebred” behind him ahead of UFC 251 this weekend.

White, who left Masvidal on the shelf as the UFC abandoned talks with the Floridian in favor of a title fight between Usman and Gilbert Burns, ended up getting back around the negotiating table with Masvidal and his team after Brazilian contender Burns tested positive for COVID-19 during a pre-travel screening.

And, despite Masvidal going public with his frustration at the UFC for not offering to pay him what he felt was a fair rate for a UFC title fight, things seem to have been smoothed over, with “Gamebred” now set to fly to Abu Dhabi to take on UFC 170-pound champion Usman in a huge new fight for UFC 251.

Speaking to ESPN’s Sportscenter, White explained the situation regarding the fight, and the hurdles that still have to be cleared before Usman and Masvidal step into the cage on “Fight Island” on Saturday night.

“Obviously them, and everybody surrounding them, has to test negative for the coronavirus,” said White, who explained that both men were still in Las Vegas pending COVID test results.

“Then we get on a plane, we fly to Abu Dhabi and we have to continue to test negative for the coronavirus for the fight to happen.”

White went on to explain how the UFC moved on from Burns after the Brazilian’s coronavirus test failure, and stated how the Masvidal fight was the one the fans wanted to see.

“When you get into negotiations for fights, these things happen,” he explained.

“Gilbert Burns has been on a tear and was consistently fighting and wanted to continue to fight. And he was the number one contender, so Gilbert Burns made sense.

“Obviously, Masvidal has become a massive star over the last year and a half, and that’s the fight the people want to see, so when Burns fell out we got in a room and figured Masvidal out.”

Now Masvidal and Usman will head to Abu Dhabi’s Yas Island, which has been transformed into “UFC Fight Island,” where four events will be held over the course of 14 days, starting with UFC 251 on Saturday night.

White revealed the logistics involved to make it happen are unprecedented, but he said he hoped the lengths the UFC has gone to make “Fight Island” a reality will prove successful as they look to host a quartet of exciting events throughout the month of July.

“I told everybody leading up to this thing when I announced Fight Island and we were going to be doing fights on an island it turned out to be Yas Island in Abu Dhabi,” White explained.

“The infrastructure was being built for the last however many months. We have an octagon on the beach, we have an arena that we’re going to fight in. We have a 10-square-mile radius that we’re calling the safety zone, where everybody will be. It consists of hotels, restaurants, training facilities and everything that the fighters will need.

“This is gonna be a very cool, unique experience for me, my staff, and obviously for the fighters. And hopefully, fun for the fans.” 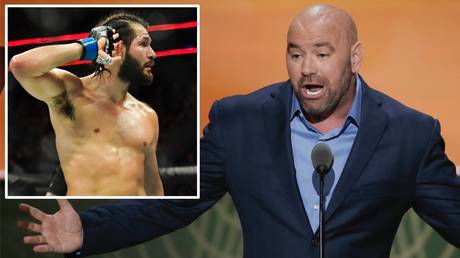