Shocked supporters have called for a hefty punishment for a footballer who was caught on camera appearing to brazenly grab a rival player’s crotch, with some angry viewers arguing that the incident was a criminal offense.

Preston’s Darnell Fisher was grappling with fellow defender Callum Paterson when he appeared to touch the Sheffield Wednesday star in a sensitive area with his left hand.

After Paterson stepped away and seemed to offer a look of disapproval to a figure out of shot, Darnell then stepped back in and extended his other hand back in, clutching what looked like a part of Paterson’s groin from his shorts.

Paterson did not react to the apparent grope as he strode past Fisher following the second-half skirmish, although he was substituted later in the half.

What the HELL is Fisher doing to Paterson here????? #swfc pic.twitter.com/wrJLcMiglm

@EFL if I did that In public I would expect to be arrested, it’s sexual assault and has no place in football, anybody who thinks this is acceptable in any circumstances, shouldn’t be allowed out in public, bet you do nothing about it!

Sexual assault. On a serious note if that is presented to the FA in this day and age then he’s getting at least a 3 game ban.

The footage of the bizarre coming-together accrued more than 178,000 views on Twitter within half an hour of Preston’s 1-0 win, provoking an avalanche of memes and accusations against 24-year-old Fisher.

“Oh my god,” responded one surprised viewer. “Did I just see Fisher grab Paterson by the balls?”

Others took the scandal more seriously, tagging local police in Preston as they claimed they had seen a crime and asking for Fisher to be handed a punishment as severe as the one received by England rugby player Joe Marler, who was banned for 10 weeks for grabbing a Welsh player’s genitals earlier this year.

Omg did I just see Fisher grab Paterson by the balls? 😳😱 pic.twitter.com/Tj9gpurqrP

“If I did that in public, I would expect to be arrested,” another told the English Football League account.

“It’s sexual assault and has no place in football. Anybody who thinks this is acceptable in any circumstances shouldn’t be allowed out in public. Bet you do nothing about it.”

“For f*ck’s sake,” said one viewer who was surprised that Fisher had stayed on the pitch, pointing to the strong reaction to Manchester City striker Sergio Aguero’s recent decision to touch a female assistant referee.

“There was uproar when Aguero tapped a lineswoman on the shoulder.”

Some supporters joked that the altercation was instantly reminiscent of one of the most infamous incidents ever to have been spotted in a match in England, when noted hardmen Vinnie Jones and Paul Gascoigne were involved in a gruesomely touchy-feely moment.

Tough-tackling Jones was pictured grimacing while plunging his hand backwards into wincing England midfielder Gascoigne’s crotch, resulting in a photograph that has since become iconic.

Patterson didn’t even react!! How odd??

Colorful striker Dean Windass appeared to recreate the scene by grabbing Gascoigne in the same area during a Premier League match between Bradford and Middlesbrough in 1999.

Windass pleaded his innocence when he was accused of carrying out the same move twice on an opposition player in a match in 2006, enraging then-Cheltenham manager John Ward – a man who would clearly take a dim view of the furore around Fisher.

“It’s a very unpleasant thing that doesn’t happen often in professional football,” Ward said at the time. “Hopefully I won’t see it again for a long time.”

Can’t write it. Barky has just come out with the line: “Darnell is a good ball player.”#pnefc

Windass’s son, Josh, plays for Wednesday and was sent off after just 17 minutes of the match between Fisher and Paterson’s side, having committed a high tackle that was described by the BBC as “dreadful”.

New Wednesday boss Tony Pulis claimed he had been unaware of Darnell’s misdemeanor and correctly predicted the reaction on Twitter.

“I’m sure with everybody on social media and all the places that people look now, he’ll be up in flames now if he’s done that.” 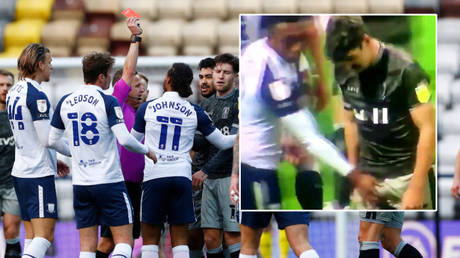