Close
Trending News
HomeSport‘That’s NOT how freedom works’: Football star Rapinoe accuses ‘a LOT of white people’ of being SNOWFLAKES over her BLM protests

‘That’s NOT how freedom works’: Football star Rapinoe accuses ‘a LOT of white people’ of being SNOWFLAKES over her BLM protests

‘That’s NOT how freedom works’: Football star Rapinoe accuses ‘a LOT of white people’ of being SNOWFLAKES over her BLM protests

Social justice campaigner and World Cup winner Megan Rapinoe has claimed that she found the reaction when she first took the knee “bizarre”, confessing that she had expected “immunity” from criticism because she is a white woman.

US women’s team captain Rapinoe admitted that she had not expected people in her homeland to find her “more than an irritant” when she first made the protest in 2016, refusing to stand for the national anthem when she attended a Women’s NBA (WNBA) match that her future fiancee, Sue Bird, was playing in.

The Golden Boot winner at the 2019 World Cup described her support for Colin Kaepernick, the NBA star who originated the gesture before a game a day earlier, as “outrage on Colin’s behalf” and a “reflex reaction”.

“In the days after kneeling, I realised I had called it wrong,” she wrote in a newly-revealed extract from her forthcoming book.

“There is a particular kind of baffled outrage reserved by white people for other white people they consider to be ‘betraying’ their race, and that week I felt the full force of it.

“The criticism kept coming. I was told I was misusing the freedom the US military had fought to give me, which – news flash – is not how freedom works.

“Hate mail poured into my agent’s office. People called for me to be fired from the team. My social media feeds filled up with abuse.”

Although the act of symbolism has now been widely adopted by elite athletes and brands keen to avoid “cancel culture” and bad PR, Rapinoe recalled how her early decisions to kneel had been in isolation and lashed out at the response she received.

“Conservative commentators in the media immediately started shouting and yelling that kneeling during the anthem disrespected the military,” she said, arguing that the “f*cking military” was pervaded by racism and suffered from a hypocritical lack of government funding.

“When I told journalists I was kneeling to draw attention to white supremacy and police brutality, a lot of white people took it incredibly personally.

“I found this bizarre. It wasn’t their fault as individuals that slavery happened, but it was the responsibility of all of us to address it.

“I hadn’t been expecting anything like this scale of outrage. When I’d campaigned for LGBTQ rights or pay equity, I had always been warmly received.

“I knew racism was different – just look at what happened to the players in the WNBA who, after staging their T-shirt protest in July, had been fined, individually and as a team, by their league. It was only after a public outcry that the fines were suspended.”

US president Donald Trump has been among Kaepernick and Rapinoe’s fiercest critics, condemning the taking of the knee and clashing with the feminist icon after she responded angrily to a suggestion that the US team would attend a ceremony to celebrate their World Cup win at the White House.

Rapinoe said that detractors such as Trump used Kaepernick as “the embodiment of the racist stereotype of the aggressive black male”, and pointed to figures from 2016 that showed young black men were nine times more likely than other Americans to be killed by police.

“When I joined Colin’s protest, I knew my whiteness and the whiteness of my sport in general probably offered some degree of immunity,” the fervent Black Lives Matter supporter said.

“I was also a woman – loud, yes, but small, pale, and, in the eyes of a lot of angry white men, relatively unthreatening.

“Even something like hair probably came into play; Colin’s hair, an Afro, was much bigger than my hair and, along with the rest of him, simply took up more space.

The 35-year-old also alleged that she had been picked on with the rest of her team before a match at Washington Spirit.

“[They] changed the pre-game schedule so the anthem played while we were still in the locker room,” she said. “[They] later accused me of hijacking the game.”

The extract is the latest example of the female Ballon d’Or winner’s unfailingly forthright views on how sportspeople should act.

Last month, she repeated her call for Cristiano Ronaldo and Lionel Messi to use their vastly-followed platforms to campaign for the same causes as she does. 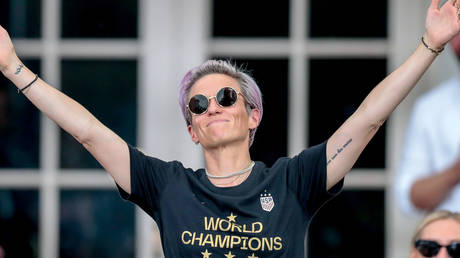