Close
Trending News
HomeSport‘That’s not a bad training partner’: World No. 1 Djokovic BACK ON COURT for US Open preparations with former Serbian star (VIDEO)

‘That’s not a bad training partner’: World No. 1 Djokovic BACK ON COURT for US Open preparations with former Serbian star (VIDEO)

‘That’s not a bad training partner’: World No. 1 Djokovic BACK ON COURT for US Open preparations with former Serbian star (VIDEO)

In one of his first public appearances since he tested positive for COVID-19 after his Adria Tour tournament, Novak Djokovic has been filmed practicing on a hard court in a cinematic video by former contender Janko Tipsarevic.

Djokovic has kept a low profile on social media since becoming one of several stars to test positive for COVID-19 following his Adria Tour events in Serbia and Croatia last month, including his coach, ex-Wimbledon winner Goran Ivanisevic.

Now he has been filmed hitting a winner at the academy in Serbia run by Janko Tipsarevic, the former world No. 8 who has all but retired after missing the 2018 season through injury and failing to progress beyond the second round of any Grand Slam last year.

“Practise, practise and, again, practise,” wrote Tipsarevic, slowing the clip down and adding dramatic music with the camera behind Djokovic as he returned a serve.

Djokovic had taken time off with his parents to explore a set of natural hills known as the Bosnian Pyramid Complex in the area of Visoko in central Bosnia and Herzegovina, according to AS.

His return to training with Tipsarevic could indicate his willingness to take part in a restricted US Open, which is expected to take place as scheduled at the end of August despite the coronavirus outbreak in the US.

The three-time champion could see this year as an excellent chance to win the tournament again given that reigning champion Rafael Nadal, who also pictured himself training last week, has said he is not targeting a return until the French Open should it take place in September.

“Who is that player in the green?” asked one fan watching the footage.

Another said: “Well, that’s not a bad training partner.”

Tipsarevic has named Djokovic as the greatest player of all time in the past and defended his compatriot when he was accused of showing scant concern for his responsibilities as president of the ATP Player Council when he left the US before the Miami Open was officially canceled in March.

“It makes no sense for someone to attack Novak,” Tipsarevic told Sport Klub at the time.

“In my opinion, he is sometimes too open and honest with others about his plans.” 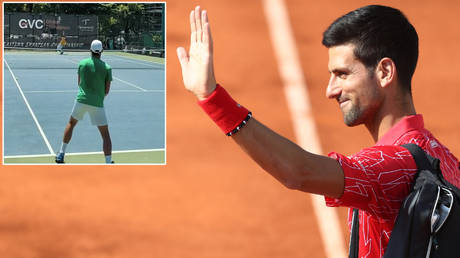 'I want to educate myself mor...