Kayla Harrison left opponent Courtney King a battered and bloodied mess in their Invicta FC contest on Friday night, as the woman who has been dubbed ‘the female Khabib’ extended her unblemished MMA record to 8-0.

Dropping down to featherweight for the first time, the result was a familiar one for Harrison, who bludgeoned the unfancied King throughout their fight in Kansas City before finishing things with a brutal ground-and-pound assault at the 4:48 mark of round two.

By that stage King’s face – and much of the canvas – was painted crimson red with blood from a nasty cut above her nose which Harrison had caused with an elbow in a dominant first round.

#InvictaFC43: There Will Be Blood. 😳 (@KaylaH) pic.twitter.com/DxFx3Pl8gv

King was cleared to come out for the second round, but double Olympic judo champion Harrison piled on more pressure, reopening the cut as the blood gushed from King’s face.

After Harrison secured another takedown the end was a formality as she pummeled King and forced the stoppage.

Even Harrison appeared to grimace slightly at the bloodied scene in front of her when stepping away from King, wiping her nose and with her shoulder splattered red.

“This was a bloody massacre,” wrote on fan sharing the aftermath. Another compared the gory scene as akin to “something out of a horror movie.”

This was a bloody massacre by Kayla Harrison. pic.twitter.com/g5xf8qelqt

“She’s a beast, and she’s only getting better,” wrote ESPN pundit Ariel Helwani, who also shared the damage to King’s face.

This is the face of the woman who is fighting Kayla Harrison right now, Courtney King. pic.twitter.com/AxduqZ7hYv

Some fans wondered why King had been allowed to continue, considering the gruesome gash she sustained in the first round and the steady flood of blood.

The 30-year-old Harrison has taken a detour to compete in the all-women Invicta FC on a two-fight deal, after her promotion PFL – where she is lightweight champion – was forced into a hiatus in 2020 due to the Covid-19 pandemic.

Harrison is expected to compete one more time in the Invicta ranks before the PFL kicks off its 2021 season in spring.

Such is the nature of Harrison’s dominance in her unblemished eight-fight MMA career, the clamor has steadily grown for her to face tougher tests, with many fans seeing her as a legitimate challenge to two-weight Brazilian UFC queen Amanda Nunes.

UFC boss Dana White has admitted in the past that Harrison is an “interesting” fighter, and the pressure for him to make a Nunes fight happen will only mount now that Harrison has shown she can make 145lbs.

Amanda Nunes vs. Kayla Harrison in 2022 (after the next PFL season) sounds great to me.

Kayla Harrison at 145 with elbows enters the MMA consciousness. Harrison goes to war with Amanda Nunes on a regular basis. She’s a monster. https://t.co/LrMPBPWBmL

Before her latest demolition show, Harrison had played down comparisons between her MMA career and that of the 20-4 Nunes, but admitted that a potential meeting was a tantalizing prospect.

“She’s the GOAT. I’m a beginner, but she’s who I’m chasing,” Harrison said of her fellow American Top Team fighter.

“She knows that, I know that, everyone knows that. She’s who I aspire to be like. That’s the goal, to be the best ever.

“I’m never going to say no to that opportunity. I would do it with respect and utmost pride in being able to fight her, and I love Amanda. I think she is awesome. I think she’s a good person.

Harrison has previously described herself as ‘the female Khabib’, referring to the unbeaten Russian UFC lightweight champion who boasts a similarly dominant ground pedigree. 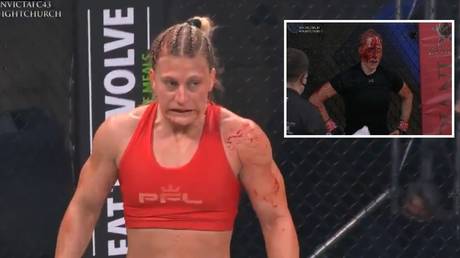