Close
Trending News
HomeSport‘That moves you ahead of Meryl Streep in my estimation’: Boxing fans salute Helen Mirren after she weighs in on controversial bout

‘That moves you ahead of Meryl Streep in my estimation’: Boxing fans salute Helen Mirren after she weighs in on controversial bout

‘That moves you ahead of Meryl Streep in my estimation’: Boxing fans salute Helen Mirren after she weighs in on controversial bout

Boxing fans have been left baffled after Hollywood actress Helen Mirren weighed in on the acrimonious no-contest verdict in the WBA super-flyweight boxing title fight between Australia’s Andrew Moloney and America’s Joshua Franco.

Taking to Instagram after the fight, the Oscar-winning actress and bona fide British Dame got her two cents in on an outcome that set social media ablaze with thousands of comments condemning the decision not to award Moloney the verdict.

In a short post, Mirren wrote that Moloney had been “robbed in Vegas” and called for the “Nevada boxing organisation” to be ashamed over the result.

Bizarrely, her comments on the fight were posted to the right of a smiling picture of Moloney’s brother and fellow fighter, Jason.

Mirren has over 907,000 followers on the social media platform, and her comments on the fight received 5,840 likes – attracting plenty of attention from fight fans.

A user named belkertia said: “I had no idea Helen Mirren had such strong opinions about boxing.”

In response, Camillercreations said: “Same. I had to double check who posted this.”

Others praised Mirren’s interest in the sport, such as davenardkarni, who said: “@helenmirren agreed! Also it brings be so much joy to know you’re keeping up with the fights! Happy Diwali!!”

Another summarized the outlook on social media when they said: “You know its bad when Helen is posting about this.”

One response read: “You watch boxing?! That officially moves you ahead of Meryl Streep in my opinion”

The unusual nature of Mirren’s posts lead to some speculation she may have been hacked, however Mirren has previously thrown punches in multiple action movies during her multi-decade career.

Just recently, she starred in The Fate of the Furious, the eighth action movie in the multibillion-dollar Fast and Furious franchise, meaning her tastes might not be a highbrow as people expect from Academy Award winners.

Although Mirren’s posting on the fight might seem unconventional, her response was not and reflected the mood across the media landscape to the verdict.

Moloney thought he had reclaimed the title from Franco, when the American was forced to retire at the start of third round when a physician declared the fight over, due to an eye injury caused by a series of exchanges in the opening stages.

However, referee Russell Mora determined that the injury was the result of a headbutt and consequently declared the match to be a no-contest.

After reviewing the footage for 26 minutes, officials from the Nevada Athletic Commission upheld the verdict, despite the commentary teams at ESPN declaring that Moloney deserved the victory as it appeared the eye was swollen shut by a series of the Australian’s punches.

The outcome leaves the Moloney-Franco match-up unresolved, with Moloney originally losing his title to Franco after an earlier contest in Las Vegas against the American back in June.

The fight was on the undercard of Terence Crawford’s victory over Kell Brook, and Moloney’s famously short-fused Top Rank promoter Bob Arum was furious with the verdict, protesting the result in vain to Bob Bennett, head of the Nevada commission.

Due to what was officially ruled an accidental headbutt, #FrancoMoloney2 has been ruled as a No Decision.

We’ll just let you guys have it out in the replies … 🙃 pic.twitter.com/8DAnn0krWV

“This is an absolute disgrace,” Arum said. “There was no headbutt. Andrew Moloney should be the new champion.”

He claimed that the officials were simply looking to defend their referee, rather than give the correct verdict.

Explaining what he told Bennett, he said: “I’m just telling him, I’m absolutely disgusted. People blame me because I’m the promoter, but I got nothing to do with the goddamn thing.

While it is unclear if there will be a third fight between the two boxers, the 88-year-old had a very clear message for how he would respond to the outcome.

“Get the f*ck out of Vegas!” he explained. 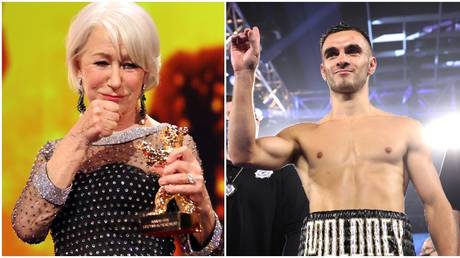