‘That man is DANGEROUS’: Rising UFC star Khaos Williams lives up to his name with sensational one-punch knockout (VIDEO)

‘That man is DANGEROUS’: Rising UFC star Khaos Williams lives up to his name with sensational one-punch knockout (VIDEO)

Khaos Williams served a reminder that he doesn’t get paid by the hour at Saturday’s UFC event in Las Vegas, as he bludgeoned Abdul Razak Alhassan in what was his second straight first-round knockout.

Welterweight Williams, 26, who was making just his second appearances in the Octagon, needed just 30 seconds to serve notice to the rest of the 170lbs division that there is a new contender in town after he launched a stunning right hand down the pipe which connected flush to Alhassan’s chin and sent him tumbling unconscious to the canvas.

The win follows February’s win against Alex Morono which was also delivered in similar fashion. On that occasion Williams needed just 27 seconds to get the job done.

Khaos Williams with the explosive KO on Abdul Razak and Alhassan ended the only way we’d expect. Now time for the Irish Dragon #MMATwitter #UFCVegas14 pic.twitter.com/gw8CJh7hOi

😱 @Bisping is all of us right now! #UFCVegas14 pic.twitter.com/SLncw0IzvL

“One of the most vicious KOs I’ve ever seen in my ****ing life.” #UFCVegas14 pic.twitter.com/w2xBVtVhVs

“It’s just hard work and dedication,” Williams said afterwards of his win. “I hope my opponent is OK as well. People gonna keep sleeping on me and the doctor gonna wake them up.

“It’s not personal. It’s just punishment. I’ve been waiting to be able to get on TV and do this. I was a diamond in the rough just waiting to be buffed off and shown to the world.”

Williams’ boss, Dana White, was more than impressed by what he saw, saying of the knockout: “[it was] one of the most vicious KOs I’ve ever seen in my f***ing life.”

Williams’ brutal finish is all the more impressive when you consider that it came against Alhassan, a fighter with a fearsome record of his own – particularly early in fights. Of his 10 career wins, each of them came by first-round knockout. This time though, he received a dose of his own medicine.

Oh my, that man is dangerous #UFCVegas14

The manner of Williams’ two performances in the UFC cage thus far, and their combined total time of just 57 seconds, suggests that there could soon be another name rising towards the summit of the UFC’s welterweight rankings.

Current champion Kamaru Usman is scheduled to defend his title against top contender Gilbert Burns in early 2021, and with Leon Edwards and Khamzat Chimaev thought to be fighting to take on the eventual winner, it is clear that the UFC’s already talent-rich welterweight fold could soon have another new name putting their hand up for title consideration. 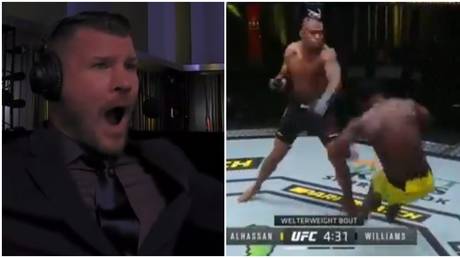