Terence Crawford retained his WBO welterweight title in style with victory over Kell Brook with a fourth-round stoppage in Las Vegas, as attention now turns to what comes next for the undefeated American.

Crawford caught Brook with a bruising right hand in the fourth round, knocking the Sheffield-born former IBF welterweight champion against the ropes, following it up with a series of blows.

Despite Brook staying on his feet, the referee ruled the first punch to be a knockdown, and gave the Englishman the count.

The fight then continued before Brook was finished less than 30 seconds later in the round by a flurry of punches from Crawford that forced the referee to step in and declare the contest over.

👑 LEFT NO DOUBT 👑@terencecrawford stuns Kell Brook with a big right hand and wastes no time closing the show in Round 4. Goodness … #CrawfordBrook pic.twitter.com/pvD56GdSdL

The result means Crawford is now unbeaten in 37 fights, defeating Brook in his first contest since last December.

While questions over the long-term future of Brook, who has now suffered a third career defeat, are likely to intensify following his brutal stoppage, it is unclear what future is in store for Crawford, a man whose undoubted quality is not yet matched by an equally high profile in the sport.

Currently ranked third highest in Ring Magazine’s top 10 list for pound-for-pound fighters, Crawford is aspiring to take on the top caliber contenders and maximize his profile in the sport.

The bout with Brook was a reasonably tough contest for the first three rounds, and it could have been a much closer match 6-8 years ago when the 39-year-old British contender was at his peak, but it is not the sort of victory that will secure Crawford his legacy or the global fan base the well-respected fighter covets for himself.

Appreciate all the love and support from each and every one of you out there screaming Team Crawford. And Still!!! pic.twitter.com/ydNoPyDth9

For the past few weeks there have been developing rumors of a rift between him and his long-time promoter Top Rank, which is run by Bob Arum. It appears the American is unhappy with the opponents he is being set up with.

In public statements, Crawford has made no commitment to continuing with Top Rank beyond the Brook fight, although it is unclear how many fights are left on his contract with them which he extended in 2018.

While the American has some big wins on his CV, the welterweight is yet to take on the likes of Gennady Golovkin or other belt-holders such as the undefeated Errol Spence Jr and Philippine boxing legend Manny Pacquaio.

This is not for a lack of effort, with a contest between him and Pacquaio cancelled following the outbreak of Covid-19, while a match-up with Spence Jr remains elusive despite years of talk in the media and extensive haggling behind the scenes.

The latest speculation is that Crawford will seek to fight Pacquaio again, with a unification fight potentially scheduled in the Middle East next year. After his fight with Brook, Pacquaio was the only name on Crawford’s lips, although Arum mentioned the possibilities of Spence Jr and Danny Garcia.

Whichever contender Crawford takes on next, he knows that he will not be able to put himself among the greats in the game until he takes on the strongest challengers in his era. 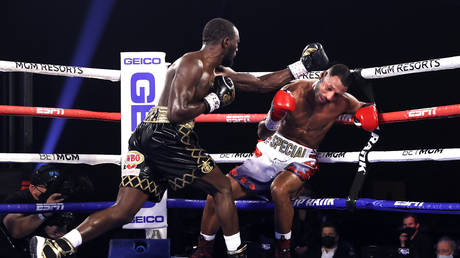