Teed off! Golfer Bryson DeChambeau rages at cameraman for ‘damaging’ his ‘brand’ as he filmed errant bunker shot

Teed off! Golfer Bryson DeChambeau rages at cameraman for ‘damaging’ his ‘brand’ as he filmed errant bunker shot

Bryson DeChambeau seems to have let his frustrations get the best of him at a tournament in Detroit, as he was seen angrily remonstrating with a cameraman who captured the golfer’s pained expression following a bunker shot.

DeChambeau, who is one of only a handful of players to have won the NCAA Division I championship and the U.S. Amateurs in the same year, had difficulties in getting out of a bunker on the seventh hole of the Rocket Mortgage Classic – and it was the camera operator who filming his efforts who appears to have taken the crux of the blame.

The 26-year-old was visibly unhappy with his bunker exit shot, slamming his club into the sand before angrily storming out of the sand trap on his way to bogeying the hole.

However, rather than blame himself, it appears the American attempted to project criticism towards the cameraman for “damaging his brand” by filming the shot, and the histrionics that followed it.

Bryson running a little hot. Caught up with him on 7 where he took a Sergio slash at the sand after splashing out of a greenside bunker, muttered an expletive after missing the par save and spent 60 seconds in a…testy discussion with a cameraman on his way to 8 tee. pic.twitter.com/ENjQt1U689

You should be ashamed that you think it’s a cameraman’s responsibility to “protect your brand! How about you don’t act like a two year old and be man enough to know that responsibility is exclusively yours! I’ll never pull for you to win again.. your character speaks volumes!

“He was literally watching me the whole entire way up after getting out of the bunker, walking up next to the green. And I just was like, ‘Sir, what is the need to watch me that long?” DeChambeau said afterward.

“I mean, I understand it’s his job to video me, but at the same point, I think we need to start protecting our players out here compared to showing a potential vulnerability and hurting someone’s image. I just don’t think that’s necessarily the right thing to do.

“We don’t mean anything by it, we just care a lot about the game. For that to damage our brand like that, that’s not cool in the way we act because if you actually meet me in person, I’m not too bad of a dude, I don’t think.”

However, judging the amount of reporting surrounding DeChambeau’s testy exchange with the cameraman, he may want to reevaluate exactly what it is that is damaging his brand – people recording his play, or his own reaction to it. 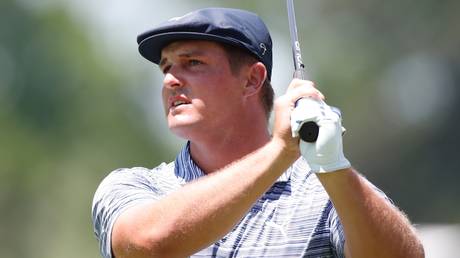