Artem Dzyuba has caught the headlines in the aftermath of Zenit St Petersburg sealing the Russian Premier League title after being filmed simulating sex with fellow scorer Sardar Azmoun during exuberant post-match celebrations.

Azmoun scored after five minutes and found the net again after Dzyuba had added a second as Zenit swept to a 4-2 victory at Krasnodar to confirm their second straight title win on Sunday.

The win meant their side established an unassailable 13-point lead over Lokomotiv Moscow with four matches left, earning their seventh league title.

Russia captain Dzyuba, who finished two goals ahead of Iran forward Azmoun as the top-flight’s leading scorer with 17 goals, was unable to contain his excitement as the champagne flowed in the locker room afterwards.

Wearing only his underpants, the striker grabbed Azmoun around the neck from behind and waved his crotch behind him in a crude gesture that was soon picked up on social media.

One fan joked that Dzyuba had been instructed to observe best behavior but had misplaced his good intentions after a couple of drinks.

Another said: “This is what happens when you score more than Dzyuba in the game.”

Dzyuba has been in astonishing form for club and country over the last two years, scoring 13 goals in 20 matches for Russia, including nine strikes in 10 games last year.

That form has seen the 6ft 5in hotshot linked with a move to Premier League Tottenham as Spurs boss Jose Mourinho looks to help his players become winners too – even if he might prefer their celebrations to show a little more restraint than Dzyuba’s. 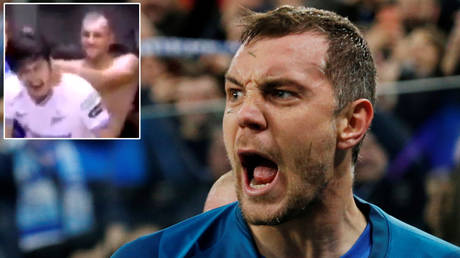