Ten years after their first fight, a rematch between heavyweight greats Fabricio Werdum and Fedor Emelianenko edges closer as Werdum admits that talks are at a progressed state over a second clash between the pair.

Werdum, whose UFC contract expired this summer after a win against Alexander Gustafsson on “UFC Fight Island,” has long spoken of his desire to rematch “The Last Emperor.”

The rematch would come more than 10 years removed from their first meeting, in which the Brazilian fighter handed Emelianenko the first legitimate defeat of his career in what was his 34th professional fight.

Ever since then, the two heavyweight rivals have been inextricably linked, but with Werdum fighting all but one of his fights in the UFC since their first meeting, and with Dana White being unable to strike a deal with Fedor, it seemed as if the possibility of a sequel to their first fight was dead in the water.

Not so. With Werdum now a free agent, he says that his manager, Ali Abdelaziz, has been in communication with Bellator, who have a fight contract with Emelianenko, about booking a rematch between two of the best heavyweight fighters in the sport’s history.

“[The talks] really are advanced. Ali went there last week, had the talk, and now it’s a matter of Fedor accepting,” Werdum told Canal Encarnada.

“And he said the other day in an interview that he wanted to do this rematch as well. Since I have a huge respect for Fedor, I’d definitely give him a rematch — not only for that, but also the financial side, the promotion, the whole history we had.”

Their first fight, which occurred in the Strikeforce promotion, saw significant underdog Werdum submit Emelianenko just over a minute into the first round in a performance that was considered at the time to be among the biggest upsets in mixed martial arts history.

Fedor would go on to lose his next two fights against Antonio Silva and Dan Henderson, but has lost just twice more in the ten fights which have followed since that trio of defeats.

Werdum, meanwhile, parlayed his win into a UFC contract, and he went on to submit Cain Velasquez to claim the UFC’s heavyweight title.

“In my opinion, I still think Fedor is the greatest of all time, you have to respect the man,” Werdum said of his rival.

“He’s done a lot of things for 10 years, he beat the best, so I think it would be a fight that everybody would like to see in Bellator, a superfight, a main event. I think it would sell a lot.

“If Fedor accepts, if he really wants to fight me one more time for this rematch… And, with all due respect, I firmly believe I will submit him again. I have no doubt. It’s not me being cocky, it’s the reality. That’s what I imagine. It will be tough, of course. People think the other fight was easy, but how about the one before?

“Fighting Fedor, the expectation, nobody believing in me, everybody against me and chanting ‘The Emperor’ in the arena. It was tough, of course, because of everything that surrounded it.”

With Fedor and Werdum now aged 44 and 43 respectively, the clock is ticking for both men in their careers – but when it is all said and done, Werdum says that both he and Emelianenko will be able to look back on their careers – and their rivalry – with pride.

“When Fedor retires, I retire, we have a tequila together and it’s over, you know?” he said. “I don’t know if it could happen.“ 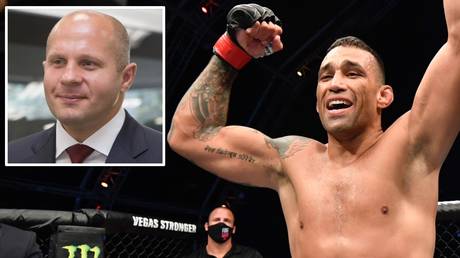