World No. 2 Simona Halep dived into a lake after capturing the Prague Open title on her return to competitive action, and the 28-year-old Romanian star is expected to announce later today if she’ll compete at the US Open.

Speaking after her victory over Elise Mertens in the Prague Open final, Halep said “she just needed her time” to make a decision.

If her form is any factor in her decision, things are looking good for her participation in New York. Playing in her first event since returning from the COVID-19 shutdown, Halep looked in irresistible form as she followed up her pre-COVID tournament win in Dubai with victory in Prague.

Her early performances may have been a little shaky, but by the time she reached the final Halep was firing on all cylinders as she claimed the title in the Czech capital, defeating Mertens 6-2, 7-5 in the final before taking her fun splash in celebration, which she shared on her Instagram page.

“We felt really safe here and all the rules were respected,” she told reporters after the tournament.

“It’s a bit stressful but the fact that everyone was good these 10 days means everything was done well.”

Halep’s early-tournament form was a little wobbly as she battled past Polona Hercog, Barbora Krejcikova and Irina-Camelia Begu.

But in the final Halep looked back to her best as she defeated Mertens in 93 minutes to capture her 21st WTA tournament title.

Now the attention will turn to whether Halep, who appeared content with the protocols in place in Prague, will sign on to play at the US Open at the end of the month.

While men’s No. 1 NOvak Djokovic has confirmed his participation, women’s No. 1 Ash Barty and men’s 2019 champion Rafa Nadal have already declared themselves out of the tournament, and the organizers could be struck another huge blow if the Romanian also follows suit.

Halep told reporters earlier in the week she needed to see what arrangements the organizers will make in terms of “traveling and stuff.”

Her concerns about potentially having to enter quarantine after the tournament have been eased, with the Romanian now saying she doesn’t think they will need to do so.

US Open organizers are said to be creating a “bio-secure bubble” in New York with strict protocols in order to safely hold the tournament from Aug. 31 without fans. 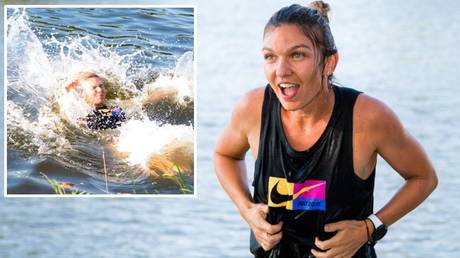