Seven-time Pro Bowl safety Earl Thomas could lose his guaranteed salary of $10 million as part of a total hit of $15 million, having been axed by the Baltimore Ravens following a fight at training with fellow safety Chuck Clark.

Thomas was less than halfway through a four-year, $55 million contract that had been the most lucrative deal handed to a defensive player in contract history.

The Ravens persuaded the 31-year-old to ditch a verbal agreement with the Kansas City Chiefs when he signed in 2019, but are now seeking to void his guaranteed salary of $10 million after his latest altercation with a teammate in a move that has reportedly been backed by the squad.

Thomas angrily confronted Chuck Clark after missing an assignment in a practise session, posting a now-deleted Instagram video of the incident and writing: “Being sent home sucks.

We have terminated S Earl Thomas’ contract for personal conduct that has adversely affected the Baltimore Ravens.

The #Ravens obviously believe they have enough of a case to void the $10m in guarantees for Earl Thomas based on their saying he’s release for conduct detrimental to the team. We’ll see what he, his camp and the NFLPA have to say about that.

The unique part of this Earl Thomas situation is #Ravens player leadership is behind they move. Sources said yesterday they communicated to management they supported a release or trade.

“A mental error on my part. A busted coverage that I tried to explain calmly…turned into me getting into [a confrontation] with a teammate.”

The footage showed Clark ripping off his helmet and throwing it to the ground, while an ESPN source said that Thomas had thrown a punch.

Leading players told the Ravens’ management that they supported a release or trade for Thomas, according to NFL Network reporter Mike Garafolo.

In a brief statement that appeared to hint at a future grievance case, the Ravens said that they had axed Thomas for “personal conduct” that had “adversely affected” the team.

Earl Thomas posted this video to his Instagram of the coverage breakdown that led to the altercation with fellow S Chuck Clark. He works to clear the air on the matter in this post: https://t.co/RK5GnkpqVl pic.twitter.com/Dc4JY5DRwa

They have already paid Thomas $22 million and are hoping to avoid a $15 million salary-cap hit following their decision, which could cost $5 million this season and $10 million next year should a claim fail.

DeShon Elliott, a 2018 sixth-round pick, is expected to provide an inexperienced replacement for Thomas, although their departing player struggled at times in his only season.

Thomas was also involved in a row with nose tackle Brandon Williams after a loss to Cleveland 11 months ago, although the disagreement did not become physical because bystanders in the Baltimore locker room stepped in.

He also missed or was late to several meetings throughout his 17-month stay, according to ESPN.

With the #Ravens making clear they are going to go after Earl Thomas’ $10M salary, it’ll play out like this:
— Baltimore will send a letter stripping him of his guarantees.
— The NFLPA will file a grievance on his behalf, and the legal battle over his money could take months.

Earl Thomas will count $5 million in 2020 and $10M in 2021 in dead money on the #Ravens’ salary cap, assuming the team can support voiding his $10M salary guarantee this season. If (when) a grievance is filed, they’d carry an additional $4M in dead cap until it’s resolved.

His nine-year spell with Seattle ended with Thomas raising a middle finger at coach Pete Carroll while being carried from the field with a leg injury.

Responding to the announcement on Instagram, Thomas said he “appreciated” the “opportunity” he had been given by the Ravens and thanked General Manager Eric DaCosta.

“Wish things could have ended differently but you live and learn.” 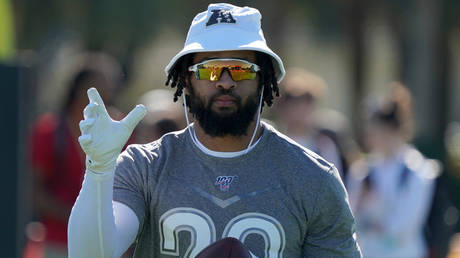