After the coronavirus catastrophe of his Adria Tour, all the apologies in the world will not be enough for Novak Djokovic – a man many people were already desperate to stick the boot into.

Djokovic has found out the hard way that good intentions can pave the way to extremely undesirable destinations.

In Djokovic’s case, the coronavirus-infected world number one and his wife Jelena are now in quarantine, contemplating the fall-out from their ill-fated Adria Tour.

Djokovic confirmed on Tuesday that he was one of four players to have tested Covid-19 positive from the inaugural event, which had played legs in Serbia and Croatia, and planned further dates in Montenegro and Bosnia and Herzegovina, as well as an exhibition match in Sarajevo.

By the time Djokovic took to social media on Tuesday evening to issue an apology, the tour had already bitten the clay court dust, being scrapped on Sunday following the news of a positive Covid-19 test for Bulgarian competitor Grigor Dimitrov.

“I am so deeply sorry our tournament has caused harm. Everything we did in the past month, we did with a pure heart and sincere intentions,” wrote a contrite Djokovic in a social media statement.

“We believed the tournament met all health protocols and the health of our region seemed in good condition to finally unite the people for philanthropic reasons.

“We were wrong and it was too soon. I can’t express how sorry I am for this and every case of infection.”

Anyone attempting to completely absolve Djokovic of the volley of blame heading his way is on a hiding to nothing.

The past few weeks have seen Djokovic and fellow top 10 stars such as Alexander Zverev and Dominic Thiem not so much pay scant regard to social distancing as to simply swat it aside altogether.

There was free mingling on the Adria Tour, and not just on the tennis courts: basketball and football matches were played, fans and ball boys were embraced, shirtless nightclub parties were held.

Party at Novak Djokovic’s tennis tournament where at least eight people, including Djokovic and his wife, have tested now positive for Covid-19 (via @Janosikgarciaz) pic.twitter.com/czjjKwXoi9

The result has been a cluster of Covid-19 cases starting with Dimitrov and taking in Croatia’s Borna Coric, Serbia’s Viktor Troicki (and his pregnant wife), Djokovic’s fitness coach Marco Panichi, and Dimitrov’s trainer Christian Groh – before Djokovic himself and his wife Jelena.

Given that these cases could be the tip of iceberg, the level of anger directed at Djokovic is unsurprising.

The Serb been branded “bone-headed” by the likes of Australian rebel Nick Kyrgios, while Brazilian doubles specialist Bruno Soares, who is on the ATP Players Council headed by Djokovic, called the ill-conceived Balkan tour a “horror show.” In light of recent events, Djokovic will surely struggle to retain his presidential status on that particular council.

Judging by Djokovic’s apology, he now acknowledges his folly. His bid to bring tennis to his home region following the constrictions of the coronavirus has spectacularly backfired, and he would be stupid not to admit it.

But for some, even Tuesday’s groveling apology will never be enough – this is, after all, a player already firmly cast in many quarters as a sporting villain.

That was a label which had stuck ever-more tightly during the Covid-19 lockdown, when Djokovic spoke about his anti-vaccination stance and spouted bizarre beliefs that mind power alone could alter the chemical structure of polluted water.

His wife Jelena did not help him in the popularity stakes by sharing a conspiracy post on Instagram linking the coronavirus pandemic to the installation of 5G networks.

Through his beliefs in alternative medicine and spirituality, Djokovic was already painted as an oddball, which when wedded with his often combative relationship with crowds meant that the 17-time Grand Slam winner was never afforded anything like the same adulation as fellow all-time greats Roger Federer and Rafael Nadal.

In this context, media claims that Djokovic’s reputation is lying in tatters because of this latest crisis is widely off-target: he was already a figure of both fun and friction.

This partly explains why there’s been no shortage of schadenfreude after Djokovic’s positive Covid-19 diagnosis, as the ‘I-told-you-so’ brigade have mobilized to smugly rub their hands.

Last one for the Djokovic fan club who abused me last week after all I said was the first priority should be health and not how many people the top players can bring to a slam 🤷🏾‍♀️🤫🤫 it’s awfully quiet right now 🤔🤫 pic.twitter.com/ByWAAgQoE5

Dumbass antivaxxer #Djokovic testing positive for covid is really some karma finally biting him on the ass. pic.twitter.com/zBOo0e7Yp8

Djokovic has been called “a**hole of the year” by the likes of irreverent US outlet Barstool Sports, while even somewhat more considered pieces have accused him of “self-glorifying hubris” by going ahead with his tour.

To reiterate, it’s hard not to accuse Djokovic of being reckless over his doomed Balkan tennis odyssey. But to claim that his ill-fated tour was a self-serving ego trip? That’s much, much wider of the tramlines.

Novak Djokovic’s decision to hold the Adria Tour event was reckless and self-glorifying and didn’t take into consideration how a highly contagious virus might act, writes @jon_wertheimhttps://t.co/zZl0dhULqB

As its organizers have been at pains to point out, the Adria Tour was conceived to bring tennis to a region which still bears the scars of war; a chance for Djokovic to bring big-name tennis to his corner of the world, at the same time serving philanthropic causes.

During the first leg in Belgrade, Djokovic was moved to tears following his match with Alexander Zverev.

“I am just overwhelmed by emotion because this reminds me of my childhood,” he said.

These were not empty words or crocodile tears. Djokovic has recalled first-hand the damage the war of the 1990s wrought in the region, and his cross-Balkan tour was an attempt at continuing to shore up relations.

It was ill-conceived, certainly, but it was not self-serving – and to suggest anything otherwise simply betrays a deeper-running dislike of the 33-year-old Serb.

And while Djokovic will bear the brunt of the blame, also complicit are the authorities of the respective countries where the tour took place. Likewise, Djokovic was the figurehead, but fellow participants played of their own volition and also deserve their fair share of censure.

Blame Novak for not having safety measures in place in his event, but don’t blame him for having Zverev, Cilic, Thiem Dimitrov, Coric, Troicki and others there. These individuals are grown up adults, making their own decisions. They’re as guilty as Djokovic.

Djokovic inarguably deserves the more reasoned disapproval he’s received, but hardly the gloating that some have indulged in, or the warped narratives that his tour was somehow a self-serving ego trip.

Novak Djokovic is already down, and taking perverse delight in kicking him serves no good whatsoever. 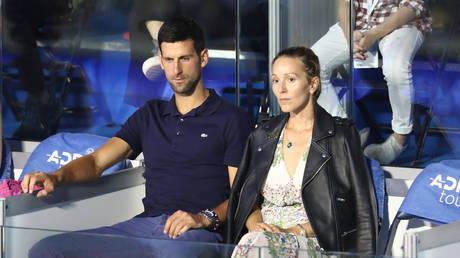