The Toronto Raptors have discussed boycotting Game 1 of the NBA second-round playoff series against the Boston Celtics to protest against the shooting of Jacob Blake by Wisconsin police.

On Tuesday the team held a meeting to discuss how they can react to the widely-discussed case of Blake, a 29-year-old unarmed black man who was shot in the back by a policeman on Sunday.

Blake’s father said that his son was shot seven times while trying to enter a car when three of his children were present.

Video of the accident recorded from a window across the street was widely shared on social media, producing a bombshell effect in the US, with many NBA players raising questions about whether the playoff games should be held at all.

“We knew coming here or not coming here was not going to stop anything, but I think ultimately playing or not playing puts pressure on somebody,” Raptors guard Fred VanVleet said.

The question of holding the NBA games preceded the 2020 Bubble opening last month, with many players, led by Brooklyn Nets guard Kyrie Irving, speaking out against resuming the championship, saying it could distract people from nationwide protests sparked by the police killing of George Floyd.

In the wake of Flyoyd’s death, large-scale protests swept across the country, with many athletes from different sports kneeling during the national anthem to protest against apparent police brutality.

If the Raptors boycott the upcoming play-off game they will bring the Black Lives Matter movement to a brand new level, as a team’s protest could affect TV broadcast schedules, the outcome of the game and sponsors’ interests. 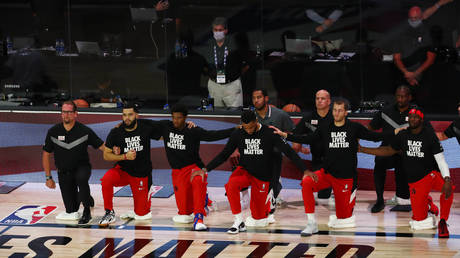