The National Hockey League (NHL) has followed the NBA’s lead and put games on hold until at least Saturday, saying that the move was meant to honor the victims of police shootings, such as Jacob Blake and George Floyd.

“After much discussion, NHL players believe that the best course of action would be to take a step back and not play tonight’s and tomorrow’s games as scheduled,” the NHL said in a joint statement with the franchise’s players association, the NHLPA.

The league said that the four games affected by the move would be played starting Saturday. The playing schedule, disrupted by the pause, will be adjusted “accordingly,” it noted.

The NHL said that it believes “much work” is to be done for the league to take on “an appropriate role” in the debate on “diversity, inclusion and social justice.”

We understand that the tragedies involving Jacob Blake, George Floyd, Breonna Taylor and others require us to recognize this moment. We pledge to work to use our sport to influence positive change in society

The move to put off the games scheduled for Thursday and Friday mirrors that of the NBA, which announced that no players would hit the court on Thursday either, as a boycott in the name of social justice continued into a second day.

While many have applauded the league’s decision to follow in the footsteps of basketball bosses and side with the players, critics of the decision argued that in rallying behind the victims of police shootings, “millionaire athletes” seemingly overlooked the plight of dozens of small business owners, who had their stores torched and ransacked during the riots spawned by the police shooting of Blake in Kenosha, Wisconsin on Sunday.

It is nice to see how the millionaire athletes are reaching out and standing with the small business owners across this country who’s lives have been upended and possibly destroyed over the senseless riots and looting too. 🤥🤥🤥🤥

@NHL walking in lockstep with the mob. I guess I won’t be watching u anymore either. None of you are even willing to walk in a cops shoes for a day. U couldn’t handle it yet u judge them. I guess u support the riots along with the lies. To hell with all sports. @NFL @NBA @MLB https://t.co/nZxGucKzap

Co-founder of the Federalist, Sean Davis, half-jokingly suggested that by “clearing the decks” for the evening, the NHL and other leagues might have unwittingly boosted the live audience for US President Donald Trump’s speech at the Republican National Convention later on Thursday night.

Say what you will about the NBA, NHL, and MLB, but it was really thoughtful of them to clear the decks tonight so everyone could watch Trump’s speech at the RNC instead of sports.

Trump has previously denounced the NBA decision to postpone games, labeling the basketball league “a political organization” for its vocal support for the Black Lives Matter protests. 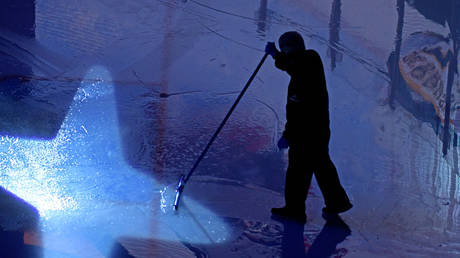