Cult hero Kazuyoshi Miura will extend the career he began in 1986 after signing a new one-year deal with Japanese side Yokohama FC – even though records suggest that the striker has not scored a goal for at least three seasons.

“King Kazu” has been handed an extension by the J1 League side despite appearing only four times last season, and is still the club captain a month before his 54th birthday as he approaches his 17th year at the club.

Miura had retired from international duty three years before Barcelona all-time top scorer Lionel Messi made his debut for the Spanish giants, and was midway through a spell with Vissel Kobe that culminated in his move to Yokahama in 2005.

Known for his “Kazu dance” when he scores, the legend of the Japanese game became the oldest ever player to feature in a professional match in 2017, breaking ex-England forward Stanley Matthews’s longstanding record.

53-year-old striker Kazuyoshi Miura has signed a new contract with Yokohama FC🔥💥. The oldest goal scorer in Japanese professional football has commited to his 36th season in the game 🥎🥎 pic.twitter.com/4Isn5u38KR

Do not let Zlatan Ibrahimovic or Ronaldo see this, they’ll take it as a challenge, those guys would start gunning for 70 years now

He eclipsed another former England striker, Gary Lineker, to win the Most Valuable Player in the J League’s first season, and scored 14 times in qualifying for the 1998 World Cup as part of a haul of 55 goals in 89 matches for his country.

“My ambition and enthusiasm towards football are increasing,” said Miura, who started out at Brazilian side Santos and has played for a myriad of teams including Dinamo Zagreb and Genoa, as well as becoming known for his taste for kaleidoscopic suits.

“I will work hard every day, aiming to contribute to the team’s victory this season by playing as many games as possible.”

You don’t have to respect him. This is the fact. He just has a connection with the sponsor. He hasn’t been fired for the last three years with no goals. He has a good status. pic.twitter.com/OyUBBiJoDP

I just want to tell you this. The J-League is not a less competitive environment that even a 53-year-old person can use. It’s a league that even Iniesta suffers. He’s just pulling money from sponsors. He is a sponsored pet, not a professional footballer.

The evergreen stalwart’s new deal ensures he will continue to eclipse the likes of Cristiano Ronaldo – famous for his determination never to be overshadowed – and Zlatan Ibrahimovic, who is targeting the Serie A title with Milan at the age of 39.

Although one cynic claimed his contract was part of a sponsorship agreement, others lauded his achievements and warned that his longevity might spur some of the current greats on to try to replicate his remarkable career.

Miura said he was pleased to have helped Yokahama win promotion last year but added that his failure to find the net meant it was “not a satisfactory season” personally.

Last 3 seasons he’s had 0 goals, poor considering he’s a forward but also he hasn’t played much at all.

Just to put it into context, this guy retired from international football with Japan 🇯🇵 21 years ago.

He has never been prolific for the club and has not scored more than three goals in a single campaign since turning 40.

Announcing that he had signed his contract at 11.11am on the 11th of January, Yokahama showed Miura entering the field with a crown superimposed on his head.

Former Brazil World Cup winner Zinho was among those to applaud the announcement, describing Miura as an “idol” on Instagram. 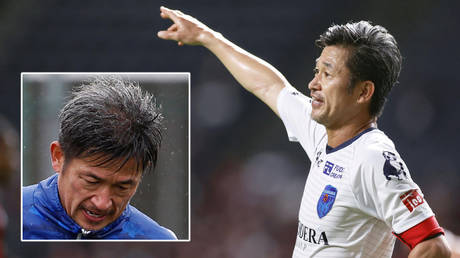